Shivakumara Swami was considered one of the most esteemed religious and social practitioners of the Lingayat-Veerashaiva faith of Lingayatism.

Shivakumara Swami (right) was the head of Sree Siddaganga Mutt based in Karnataka's Tumakuru.

Dr Shivakumara Swami, the seer who headed the Sree Siddaganga Mutt in Karnataka's Tumakuru, has died at 111 after weeks of treatment. Shivakumara Swami had been unwell for a while and had been on life support for the past two weeks.

Karnataka will observe three-day mourning and schools, colleges and government offices will be closed on Tuesday as a mark of respect for the seer revered by millions.

Prime Minister Narendra Modi also posted a moving tribute. "His Holiness Dr. Sree Sree Sree Sivakumara Swamigalu lived for the people, especially the poor and vulnerable. He devoted himself towards alleviating ills like poverty, hunger and social injustice. Prayers and solidarity with his countless devotees spread all across the world," he tweeted. Congress president Rahul Gandhi said the seer's passing had left a "deep spiritual void".

I have had the privilege to visit the Sree Siddaganga Mutt and receive the blessings of His Holiness Dr. Sree Sree Sree Sivakumara Swamigalu.

The wide range of community service initiatives being done there are outstanding and are at an unimaginably large scale. pic.twitter.com/wsmRp2cERd

I am sorry to hear about the passing of Shivakumar Swami Ji, Pontiff of the Siddaganga Mutt. Swami Ji was respected & revered by millions of Indians, from all religions & communities. His passing leaves behind a deep spiritual void. My condolences to all his followers. 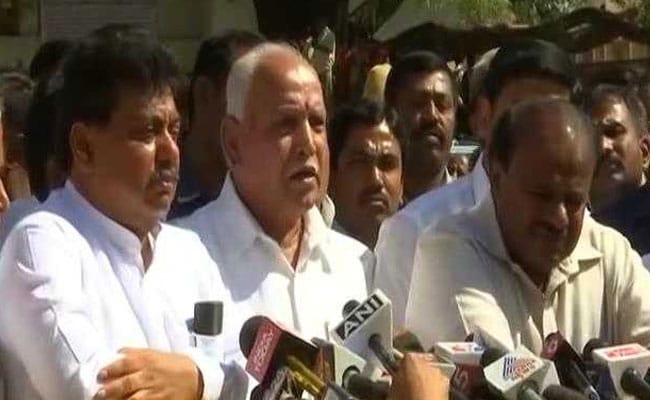 HD Kumaraswamy and BS Yeddyurappa had said Shivakumara Swami should be awarded the Bharat Ratna.

Massive security arrangements are in place around the mutt that was surrounded by hundreds of devotees who had travelled to Tumakur try and catch a glimpse of their spiritual leader.

Shivakumara Swami was one of the most respected religious and social practitioners of the Lingayat-Veerashaiva faith of Lingayatism.

He was awarded the Padma Bhushan and both Chief Minister Kumaraswamy and Mr Yeddyurappa had said the seer should be awarded the Bharat Ratna, the country's highest civilian award.

A team of specialists from Bengaluru had been treating him for days and he was also briefly taken to Chennai before being brought back to the mutt. A special 'yagna' was organised at the mutt and other places in the state to pray for his recovery.

Shivakumara Swami had developed a lung infection after an operation in December.

As the founder of the Sri Siddaganga Education Society, he helped thousands access education. He also had an honorary doctorate in literature. The seer was a philanthropist and touched the lives of many, from different religions and castes.