Karnataka Govt Crisis Updates: Earlier, the Supreme Court had ordered the lawmakers to meet Speaker Ramesh Kumar at 6pm. The speaker will be conveying his decision to the top court today. 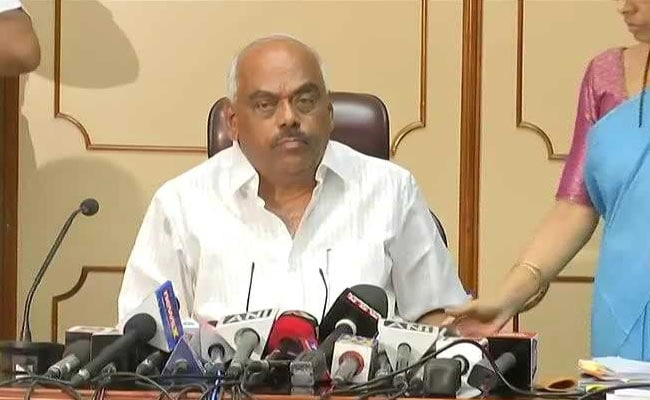 The ten rebel Karnataka lawmakers, with heavy police protection, reached the state assembly to meet the Speaker and confirm their resignations. The resignations will leave the ruling Congress-JDS coalition in minority.

Earlier, the Supreme Court had ordered the lawmakers to meet Speaker Ramesh Kumar at 6pm. The speaker will be conveying his decision to the top court today.

The rebel lawmakers had gone to the court alleging the Speaker had not accepted their resignation letters in order to help save the Karnataka government and give its negotiators time to regain numbers.

The speaker also said there was no need for the lawmakers to involve the court. "They could have willingly come here. That itself shows the whole thing is murky".

The Speaker claims he was not in office when the resignation letters came in on Saturday. After examining them on Tuesday, Mr Kumar rejected eight, asking the lawmakers to meet him on July 17.

Here are the highlights on the Karnataka crisis:

Ghulam Nabi Azad, Congress: With active support of government & Raj Bhavan, BJP leaders made Congress leaders & ministers fly to Mumbai in special aircraft & provided them security from Maharashtra government. They were not allowed to meet anyone except BJP leaders. (11.7.19) https://t.co/WunO1mpnB1

It is unnecessary to give importance to Tourism Minister Sa. Ra. Mahesh's casual meeting with BJP leaders at the new building of KK guest house, managed by KSTDC which comes under his portfolio.2/2

Jul 11, 2019 21:44 (IST)
"All signs of a fascist rule," tweets Congress's G Parameshwara
"I'm confident the resignations will be carefully examined by the Speaker. We abide by the law & believe in our Constitution. It is alarming that BJP's deplorable attempts to topple our government is supported by its national leaders. All signs of a fascist rule," tweeted Congress's G Parameshwara.

I'm confident the resignations will be carefully examined by the Speaker. We abide by the law & believe in our Constitution.

It is alarming that BJP's deplorable attempts to topple our government is supported by its national leaders. All signs of a fascist rule!

READ HERE: "No Point Blaming BJP, Fault Within": Congress Media Coordinator Quits
Karnataka Political Crisis: Amid a leadership vacuum in the Congress, its national media coordinator Rachit Seth on Thursday resigned from the post saying there was no meaning holding any post after Rahul Gandhi quit as President.
Jul 11, 2019 18:45 (IST)

"PWD Minister HD Revanna has directed the additional chief secretary to PWD Sri Krishna Reddy to promote about 800 engineer officers in PWD, Irrigation, RDPR department and issue posting to their choice especially those belong to Gowda community by descending and accepting huge and large amount bribes involving about 50 crores in one day," the letter read, reported news agency ANI.

Calling Mr Revanna a de-facto Chief Minister, the BJP said that he was issuing "illegal promotions" and transfers for all departments, demanding crores of bribes.
Jul 11, 2019 18:14 (IST)
Rebel lawmakers go inside the Karnataka Speaker's room.

Jul 11, 2019 18:10 (IST)
Congress Chief whip in assembly Ganesh Hukkeri issues whip to party legislators to attend tomorrow's session to pass the finance bill and other matters, failing which absentees will be disqualified under the anti-defection law, according to news agency ANI.
Jul 11, 2019 18:05 (IST)
Karnataka Speaker Ramesh Kumar says: "I am a citizen of this country, and a all of us respect the Supreme Court... I am duty-bound to meet the rebel lawmakers. Can't say whether any decision will be taken today or not."
Jul 11, 2019 18:01 (IST)
Karnataka Speaker Reaches Assembly
The Speaker, Ramesh Kumar, has reached the assembly and will meet the rebel lawmakers shortly. Ten Karnataka lawmakers who allege their resignations haven't been accepted in an attempt to help the ruling Congress-Janata Dal Secular coalition in the state flew to Bengaluru this evening after the Supreme Court ordered them to meet the Speaker.
The top court has ordered police protection for the rebel lawmakers and said the Speaker must decide today on whether the resignations stand.
Jul 11, 2019 15:59 (IST)

The rebel MLAs have been directed by the Supreme Court to meet Karnataka assembly speaker at 6 pm today & resubmit their resignations. 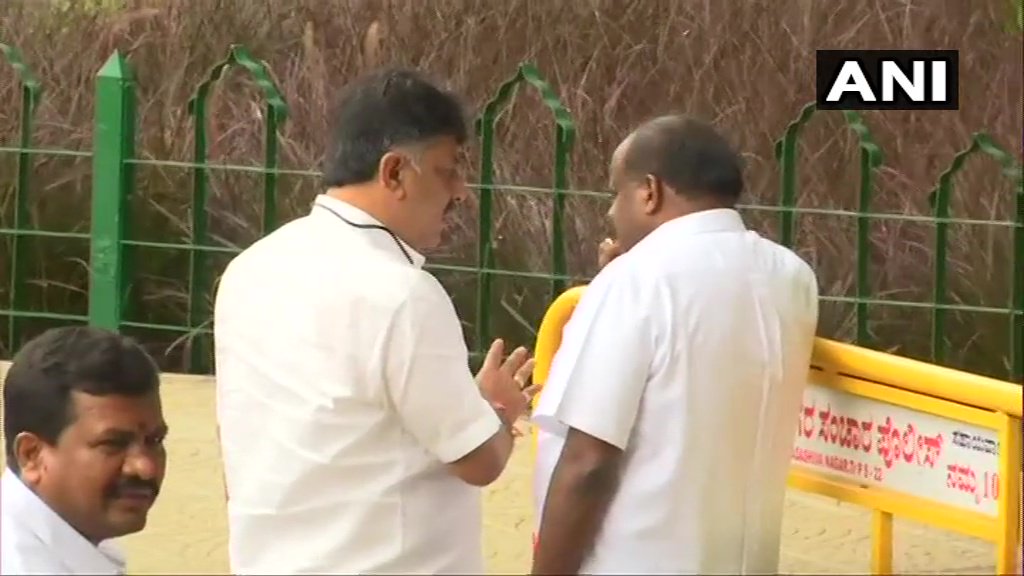 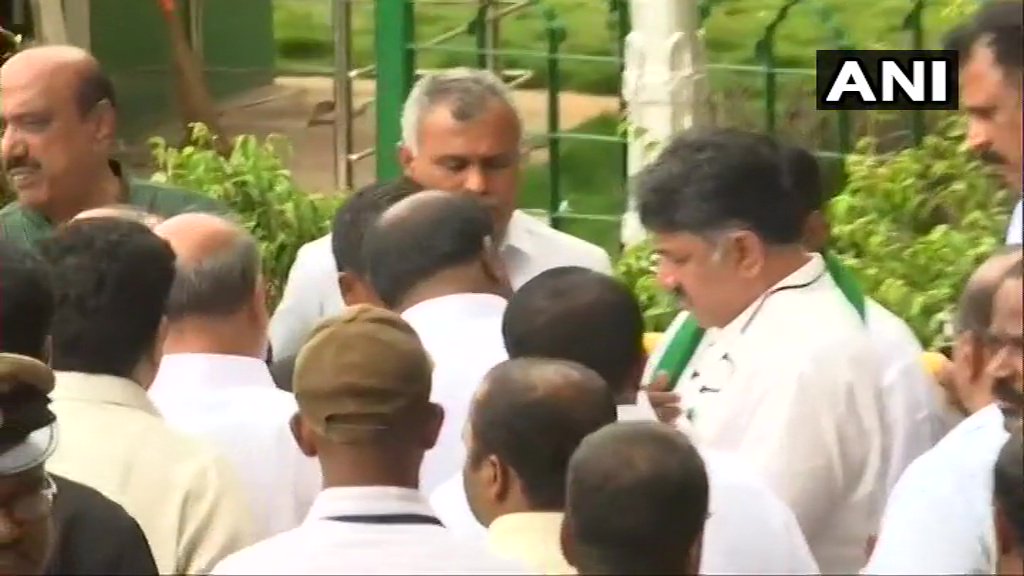 Jul 11, 2019 15:42 (IST)
Karnataka Crisis: Karnataka Rebel lawmakers, in Mumbai, fly back to Bengaluru
Sixteen Karnataka rebel MLAs staying at a luxury hotel in Mumbai flew back to Bengaluru Thursday afternoon to meet the Assembly Speaker, according to a PTI report, quoting sources.

The legislators boarded a special flight to the Karnataka capital at 2.50 pm, the sources said.

The development came after the Supreme Court allowed the rebel MLAs of the Congress-JD(S) coalition in Karnataka to meet the Speaker at 6 pm to convey to him their decision to resign.
Jul 11, 2019 14:52 (IST) 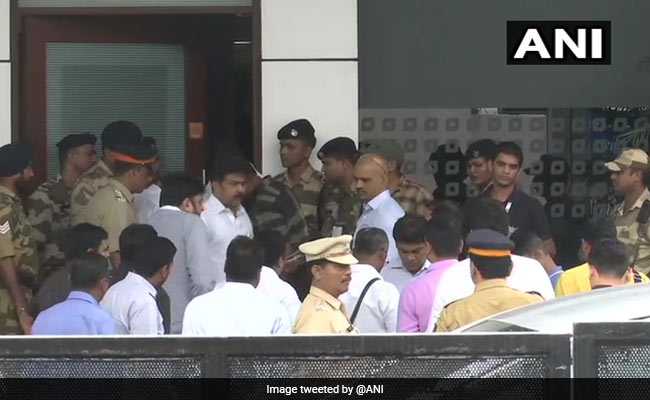 Rebel K'taka Congress MLA ST Somashekar: Our support is there with this govt, to respect our leader Rahul Gandhi. But commitment made by the coalition govt couldn't satisfy us. We didn't taken this decision all of a sudden, we had even informed earlier, but they did not care. pic.twitter.com/drxINzQN4b 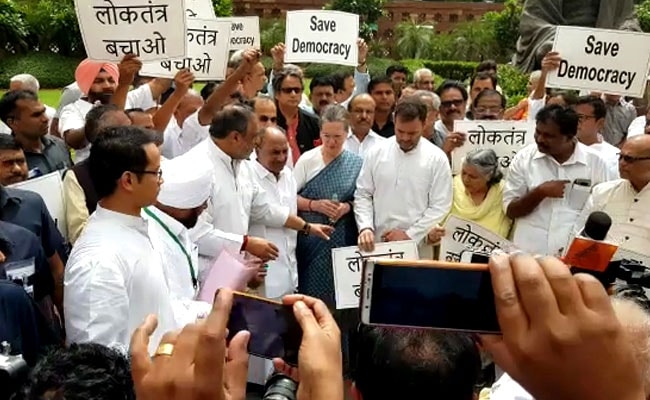 Rahul Gandhi and his mother Sonia Gandhi today joined a Congress protest at parliament a day after the party lost most of its lawmakers to the ruling BJP in Goa and came closer than ever to losing power in Karnataka following several resignations.
Congress lawmakers shouted slogans, holding up placards of "Save Democracy", accusing the BJP of "killing democracy" by luring away opposition lawmakers in various states.
"Instead of focusing on development and other issues, the BJP is disrupting work wherever there are elected governments and trying to finish off democracy," said Congress leader Gaurav Gogoi.
Jul 11, 2019 11:51 (IST)

Karnataka Minister and Congress leader DK Shivakumar in #Bengaluru: We have confidence that the MLAs will be with us. I hope they will come back and withdraw their resignation. #Karnatakapic.twitter.com/qmfqPsPRee

Jul 11, 2019 11:30 (IST)
Appear Before Speaker At 6 pm: Top Court To 10 Rebel Karnataka Lawmakers
Supreme Court asks 10 rebel Congress-JDS MLAs of Karnataka "to meet the Karnataka Assembly Speaker at 6pm today and submit their resignations "if they so wish."
The court also ordered the DGP of Karnataka to provide protection to all the rebel MLAs.
Jul 11, 2019 11:21 (IST)
The Supreme Court says Karnataka Speaker has to take a decision in remaining part the day. The Court also ordered the DGP of Karnataka to provide protection to all the rebel MLAs and adjourned the hearing for tomorrow
Jul 11, 2019 10:22 (IST)
Trinamool Congress MP Saugata Ray has given Adjournment Motion Notice in Lok Sabha over political situation in Karnataka and Goa, reports news agency ANI.
Jul 11, 2019 10:08 (IST)
Bengaluru Police Commissioner Alok Kumar has issued prohibitory orders under section 144 of the Criminal Procedure Code, restricting the gathering of more than five persons and any form of protests within the two-km area around the Vidhana Soudha.
The police commissioner issued the orders on Wednesday night, taking into account intelligence inputs.
Jul 11, 2019 09:49 (IST)
The Congress has imploded in neighbouring Goa. Ten out of 15 Congress lawmakers have split from the party in Goa and have merged with the ruling BJP.
"10 Congress MLAs, along with their Opposition Leader, have merged with the BJP. The strength of the BJP has now risen to 27. They had come for development of the state and their constituency. They have not put forward any condition, they have joined BJP unconditionally," Goa Chief Minister Pramod Sawant was quoted by news agency ANI as saying.
Jul 11, 2019 09:48 (IST)
Much of the party's failure has been blamed on infighting, which has intensified in states like Punjab and Rajasthan, where it is in power.
Jul 11, 2019 09:48 (IST)
The Congress has been stumbling from crisis to crisis since its defeat in the national election, in which the party won just 52 seats across the country and was wiped out in 17 states.