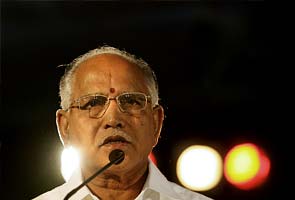 New Delhi/Bangalore: Twenty four hours after he was indicted for accepting kickbacks from a mining company, BS Yeddyurappa has agreed to resign as Chief Minister of Karnataka. (Watch: Rise and fall of Yeddyurappa)

His party, the BJP, said that it made a "unanimous" decision this morning that he has to make way for a new leader. The BJP said it expected Mr Yeddyurappa to abide by its decision. He spent most of the day demonstrating the opposite. A meeting at his house drew eight ministers and 24 other senior BJP leaders; it telegraphed Mr Yeddyurappa's grip over the party in his state. (Read: Yeddyurappa discusses options with loyalist ministers, legislators)

But at 5.30 pm, Mr Yeddyurappa, the BJP's only Chief Minister in the South, told party president Nitin Gadkari he will respect the party's order. He has agreed to resign on July 31 - a date so chosen as the current position of the moon is 'unfavourable'. (Read: Yeddyurappa's press statement)

On Friday, Arun Jaitley and Rajnath Singh will travel from Delhi to Bangalore as observers while MLAs select the new Chief Minister. Mr Yeddyurappa, sources say, is likely to go on an extensive tour of temples.

The party will provide him an honourable exit by picking a successor with his approval. Safe passage will also be offered via a replacement who has not in the past been a vocal critic of Mr Yeddyurappa, who has survived multiple coup attempts by factions opposed to him.

Mr Yeddyurappa was "advised to resign immediately" said his party after a senior-level meeting at Mr Gakdari's home this morning. In Bangalore, emissaries travelled through the day between different powers of centre  of the BJP - an exercise to gauge whether Mr Yeddyurappa stood a fighting chance.  His message to Delhi was clear - the corruption charges against him are not new and not proven.

Karnataka's Lokayukta or ombudsman - Santosh Hegde - indicted his family and him of accepting kickbacks from a mining company.  Mr Hegde presented yesterday a report on illegal mining that also faults other politicians. They include the Reddy brothers - Janardhana and Karunakara - who are members of Mr Yeddyurappa's Cabinet, and mining barons from Bellary. Mr Hedge has recommended that Mr Yeddyurappa and others be prosecuted under the Prevention of Corruption Act. (Watch: Will Reddy brothers be fired too?)

What may have forced Mr Yeddyurappa's hand was the Reddys' decision late this afternoon to follow the central BJP's lead. "We, including the Reddy brothers, abide by the decision of the party high command for change of leadership in the state," said Health Minister B Sriramulu, who has also been named in Mr Hedge's expansive report.  It's not yet clear whether the Reddys will be sacked by the BJP. (In Pics: After Yeddyurappa who?)

Why the BJP abandoned Yeddyurappa

Next week, the Monsoon Session of Parliament begins. The BJP has planned a high-volume attack against the UPA for corruption - a frighteningly long list of financial scandals has hurtled into the headlines in the last few months, gifting the BJP an opportunity to strike. The Congress has repeatedly said that any allegations of corruption are ill-advised by the BJP, considering its unwavering loyalty to Mr Yeddyurappa as the charges piled up against him. A series of land scams, for example, were allegedly constructed via the Chief Minister's office. He is accused of freeing up or denotifying land acquired cheaply for public projects; this prime property was then made available to his children and their companies, say his critics.

Mr Yeddyurappa cancelled some land allotments after media reports and a sustained campaign by his arch-enemy, HD Kumaraswamy, the Opposition leader who was once Chief Minister of Karnataka. Mr Kumaraswamy has also been indicted by Mr Hegde in his report on mining; he is accused of sanctioning out-of-turn licenses to two mining companies.

Contenders for next Chief Minister

Jagadish Shettar
He is currently the Rural Development Minister in Karnataka. Mr Shettar is not a nationally-known figure, but being a Lingayat like Yeddyurappa can work in his favour. Or it can work against him - if Yeddyurappa wants to stay the dominant Lingayat leader.

Eshwarappa
He is the Karnataka BJP president and belongs to the backward caste. Mr Eshwarappa, too, is not a nationally-known figure.

Promoted
Listen to the latest songs, only on JioSaavn.com
Ananth Kumar
Long considered a Yeddyurappa rival, Mr Ananth Kumar is believed to be working against him behind his back. Publicly, however, he and Yeddyurappa put on a united front. Mr Kumar is known at the national level. But he is a Brahmin so does not command a large vote bank.

VS Acharya
Former Home Minister, Mr VS Acharya is a Yeddyurappa loyalist. He has faced trouble many times in the past. Mr Acharya is a Brahmin, which may work against him.

Suresh Kumar
He is the current Law Minister and has a very clean image. As a Brahmin, he may not have a large vote bank to count on but a non-controversial image may work in his favour.

Shobha Karandlaje
She is not really in the line to succeed Yeddyurappa. And her proximity to the Karnataka Chief Minister may work against her. Ms Karandlaje belongs to the Vokkaliga caste.
Comments
illegal miningKarnataka chief ministerlokayukta reportsantosh hegdeYeddyurappa asked to resign