Karnataka Bypoll Results: BJP is set to make big gains in the Karnataka bypolls as it was leading in 12 out of 15 seats where the polling was held on December 5.

BJP is set to make big gains in the Karnataka bypolls as it was leading in 12 out of 15 seats where polling was held on December 5. The ruling BJP needs to win at least seven seats to claim a majority in the House, which will have a strength of 224 after the bypolls, with 2 seats still vacant. The BJP currently has 105 MLAs (106 including the support of an independent candidate) while the Congress has 66 and the JDS 34.

Here are the Live Updates of Karnataka Bypoll results 2019:

Dec 09, 2019 16:34 (IST)
Dinesh Gundu Rao Resigns As Karnataka Congress Chief After Bypoll Defeat
"We should self reflect. There are so many elections. Whatever the people's mandate is, we should accept it wholly. They induced defections and brought down the government. I am sending my resignation. Whatever directions are given by the party leadership will be done. We thought people will not vote for defections, we thought people's mandate will be against this kind of politics. Because when this kind of mandate comes, it means that this encourages Operation Kamala. I will give Sonia a detailed report of what went right and wrong. Ultimately this is a democracy, that's the beauty. We accept the mandate," Dinesh Gundu Rao said at a press conference.
Dec 09, 2019 15:56 (IST)
Siddaramaiah quits as Congress Legislative Party leader after bypoll defeat
"As a leader of legislative party, I need to respect democracy. I have resigned as Congress Legislative Party leader. I have submitted my resignation to Sonia Gandhi Ji. I have also resigned as leader of opposition in Karnataka Assembly," Siddaramaiah said.
Dec 09, 2019 15:52 (IST)
CLP leader Siddaramaiah tenders resignation after poor show by Congress in the Karnataka Assembly bypolls.
Dec 09, 2019 14:09 (IST)
The Bharatiya Janata Party has won 5 seats in the Karnataka bypoll and is leading at 7 places, according to the ECI's official website. 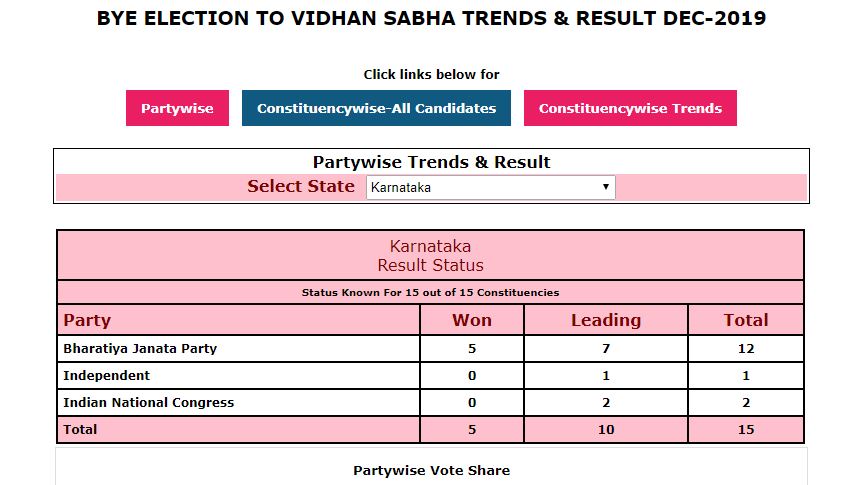 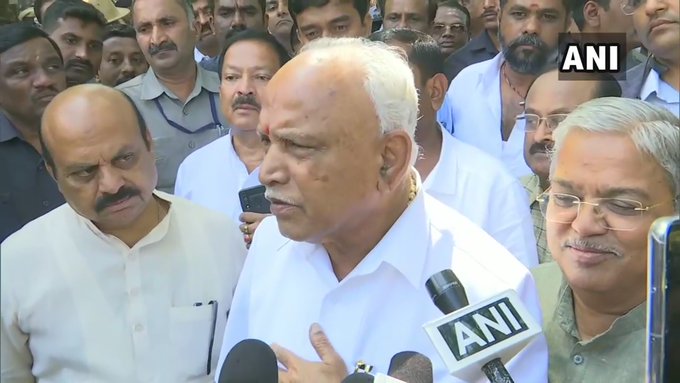 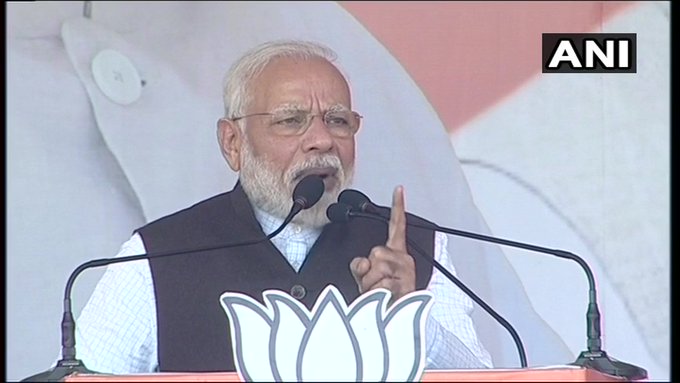 Dec 09, 2019 12:38 (IST)
BJP for Karnataka Tweets
"Today's spectacular victory for BJP in by-elections is a victory for BJP's "Development Politics" under the leadership of CM @BSYBJP. By summarily rejecting the "Adjustment Politics" of
@INCKarnataka and @JanataDal_S, Voters have reposed their faith in BJP. #BJPSweepsKarnataka"
Dec 09, 2019 12:20 (IST)
BJP wins Yellapur seat
BJP candidate from Yellapur, Arabail Shivaram Hebbar, became the first candidate to register a victory in the bypolls to 15 assembly constituencies in Karnataka, for which the counting is underway on Monday.
Mr Hebbar defeated Congress' Bhimanna Naik by a margin of over 31,000 votes. A two-time Congress MLA from Yellapur, Mr Hebbar was among 13 disqualified MLAs whom the BJP had given a ticket to contest the bypoll as party candidate.
Dec 09, 2019 12:07 (IST)
"CAB A Cab Ride With Divisive Driver," Tweets Kapil Sibal
Senior Congress leader Kapil Sibal on Monday hit out at the government over the Citizenship (Amendment) Bill, saying it is a "cab" ride with a divisive driver. "CAB is a cab ride with a divisive driver to: destabilise, destroy our polity values both societal and constitutional with an eye only on political dividends. Hath milao Desh bachao!" Mr Sibal said in a tweet.
Dec 09, 2019 11:41 (IST)
BS Yediyurappa celebrates with his son BY Vijayendra
Karnataka Chief Minister BS Yediyurappa celebrates with his son BY Vijayendra as BJP leads on 12 out of 15 seats. 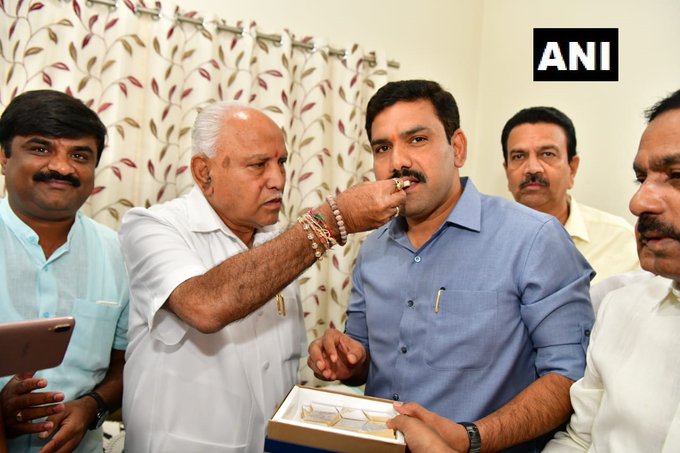 Dec 09, 2019 11:19 (IST)
Bengaluru MP Tejasvi Surya tweets
"Thank you Karnataka for giving a stable government. Your 2018 mandate for BJP has been fortified with the bye election results.
Under the leadership of CM @BSYBJP our government will give stable and good governance for our beloved state.
Hearty congratulations to Sri @BSYBJP"
Dec 09, 2019 10:38 (IST)
"People Have Accepted Defectors": Congress's DK Shivakumar
"We have to agree with the mandate of the voters of these 15 constituencies. People have accepted the defectors. We have accepted defeat, I  don't think we have to be disheartened," Congress DK Shivakumar has been quoted as saying by news agency ANI.
Dec 09, 2019 10:35 (IST)
BJP is now leading in 11 of 15 assembly seats. The Congress is leading in two seats and the JDS is leading in one constituency
Dec 09, 2019 10:10 (IST)
Early Trends: BJP Makes Big Gains
The early trends showed that BJP leading on 10 seats, while the Congress and the JD(S) were leading on the two seats each. The BJP candidates are leading from the Athani, Kagwad, Gokak, Yellapur, Hirekerur, Ranibennurm Vijayanagara, Chikkaballapur and the Mahalakshmi Layout seats. The Congress candidates, on the other hand, are leading on the Hunasuru and Shivajinagar constituencies while two Janata Dal-Secular candidates have taken the lead from the Yeshvanthapura and Krishnarajapete seat. One independent candidate, Sharath Kumar Bachegowda is also leading from the Hosakote seat in the initial phases of the counting.
Dec 09, 2019 10:03 (IST)
Latest trends (Source: ECI)
BJP leading in 9 seats, Congress and JDS leading in 2 seats each, Independent - 1, as per EC trends. 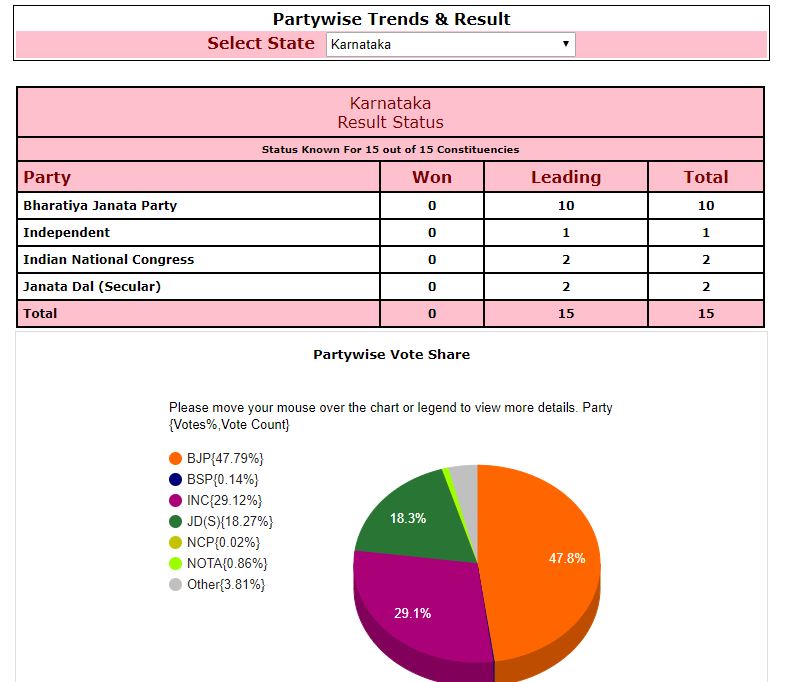 Dec 09, 2019 09:53 (IST)
SK Bachegowda Leading In Hosakote
SK Bachegowda, who was expelled by the BJP for filing nomination as an independent, is leading. He is the son of BJP MP BN Bache Gowda. 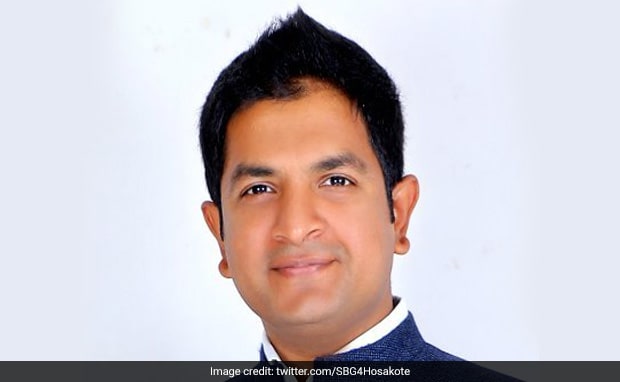 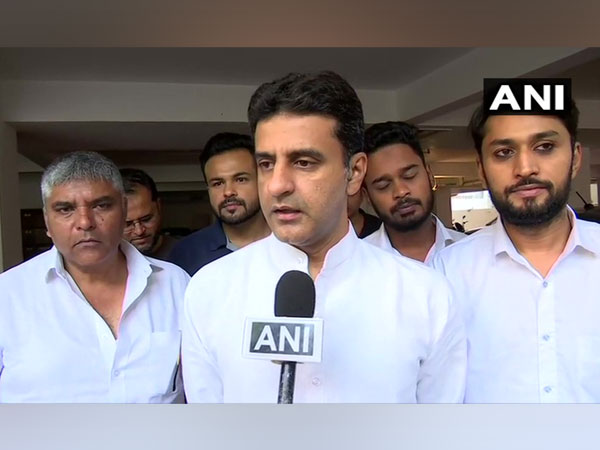 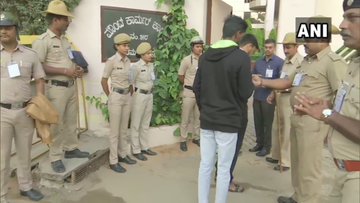 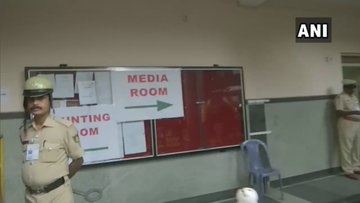