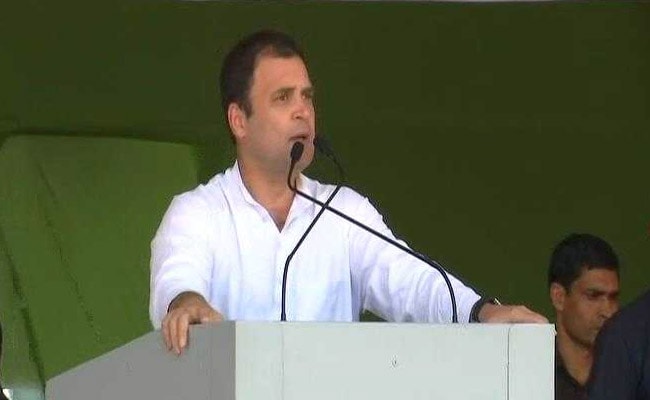 Bengaluru: Congress chief Rahul Gandhi -- who has matched Prime Minister Narendra Modi rally for rally so far in the last, critical phase of campaigning in Karnataka --, today gave a scathing response to the personal attacks against him. It only signals fear, said the 47-year-old a day after the Prime Minister heaped taunts on him during his first rally in Karnataka yesterday.

"Whenever Modi is afraid... Let me tell you his character... he launches a personal attack. He will talk ill of a person... That is the difference between me and him," said Mr Gandhi. "Let him say anything about me. Wrong or right, it will make no difference," added the Congress chief, who is focusing on the northern district of Bidar today as the Prime Minister is on a whirlwind tour of three districts.

Offering further explanation, he said it is also because the Prime Minister has little to say in Karnataka.

The Prime Minister "cannot say anything, but since he needs to give a speech, he talks about Rahul Gandhi," said the Congress chief, who recently challenged PM Modi to a 15-minute debate in parliament. The Prime Minister had responded with an insult, saying he challenged Mr Gandhi to speak for 15 minutes without any notes on the achievements of the Congress government in Karnataka.

Promoted
Listen to the latest songs, only on JioSaavn.com
"His speaking for 15 minutes is itself is a big thing...  You can speak in Hindi, English or your mata ki matra-bhasha (mother's mother tongue)," he said in yet another reference to Sonia Gandhi's Italian origins.

At the rally on Tuesday in Karnataka's Chamrajnagar, where he was speaking, PM Modi levelled further taunts. "Congress president, sir, we cannot sit before you. You are 'naamdar' (famous), while I am 'kaamdar' (ordinary worker). We have no status to sit in front of you."

J&K Civilian Killings To Be Probed By National Investigation Agency