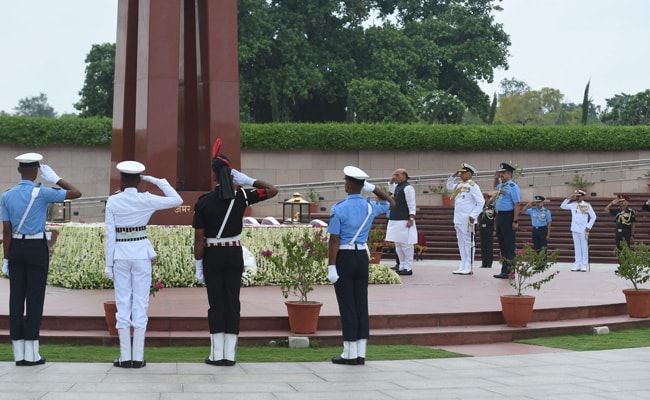 As India on Tuesday commemorated 23 years of its victory over Pakistan in the Kargil War, Defence Minister Rajnath Singh paid tribute to soldiers who lost their lives in the 1999 Kargil War and laid a wreath at the National War Memorial in Delhi.

Each year, Kargil Vijay Diwas is celebrated on July 26 to honour the valour and sacrifice of the soldiers who laid down their lives in the line of duty during the Kargil War.

The Indian Armed Forces defeated Pakistan on July 26, 1999. Since then, the day is celebrated as 'Kargil Vijay Diwas' to rekindle the pride and valour of the soldiers who took part in Operation Vijay.

Prime Minister Narendra Modi also paid tribute to the soldiers who laid down their lives in line of duty. He said Kargil Vijay Diwas is a symbol of pride and glory for the country as he saluted the soldiers for fighting bravely for their motherland.

"Kargil Vijay Diwas is a symbol of pride and glory of Maa Bharati. On this occasion, my salute to all the brave sons of the country who have accomplished their valor in the defense of the motherland. Jai Hind!," he said in a tweet.

The day marks the victory of Indian soldiers in recapturing the mountain heights that were occupied by the Pakistani Army on July 26, 1999, known as the Kargil War.

The Kargil War was fought between May to July, 1999, against Pakistan intruders, who in the winters of 1998 occupied fortified defences overlooking the NH 1A in Kargil's Dras and Batalik Sectors of Ladakh region with an aim of dominating all military and civil movement on the highway.

Earlier, President Droupadi Murmu paid homage to the brave soldiers on the Kargil Vijay Diwas and in a tweet said, "Kargil Vijay Diwas is a symbol of extraordinary valor, valor and determination of our armed forces. I bow to all the brave soldiers who laid down their lives to protect Mother India. All the countrymen will always be indebted to them and their family members. Jai Hind!".