Madhya Pradesh: In the video tweeted by Kamal Nath, a woman is seen being pushed and punched by the men 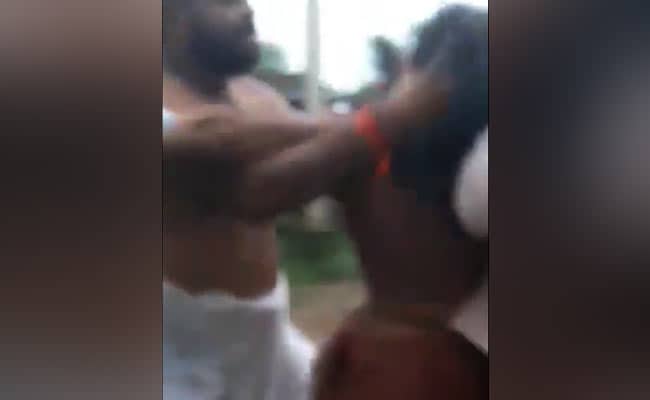 Madhya Pradesh: Kamal Nath tweeted a video of a group of men thrashing a woman

Congress leader Kamal Nath has criticised the Shivraj Singh Chouhan government after a woman and her daughter were seen in a video being thrashed by a group of men in Madhya Pradesh.

In the video tweeted by Kamal Nath, a woman is seen being pushed and punched by the men. Her daughter, who appears to be taking the video, shouts at them, "Leave my mother alone. Stop it."

A man without a shirt is seen trying to wear a dhoti. Then he holds the woman and pushes her to the side, and the sound of blows landing on her follows. Her daughter is heard appealing to the men to stop the attack.

"In Betul district's Shobhapur, a Dalit woman and her daughter were thrashed in public by BJP leaders for protesting against them," Kamal Nath tweeted in Hindi.

Kamal Nath alleged the police did not act against the men under pressure even days after a complaint was filed. "A police complaint supported by the video was filed by the woman five day ago, but no action has been taken against the accused due to abuse of power," the former chief minister tweeted.

"Shivraj ji, such incidents are happening to our sisters under your government and the accused are being protected. Immediate action should be taken against them and the woman and her daughters must get justice," Kamal Nath tweeted.

Another video shows the woman and the man in dhoti - both neighbours, according to the police - arguing over garbage being strewn in front of their homes. The argument turns into blows in a few seconds.

In Betul a woman and her daughter were thrashed in public by BJP corporator after arguing over garbage being strew in front of their homes. The argument turns into blows in a few seconds.@ndtvindia@ndtvpic.twitter.com/f4vXFf5UY5

"They fought in front of their house over garbage being strewn in front of the home of the accused," senior police officer Simala Prasad told reporters.

"Police got the application yesterday, so we have filed a case. The video was released today, they fought earlier also," Mr Prasad said.