The 87-year-old leader accepted the party's membership in the presence of UP BJP chief Swatantra Dev Singh. 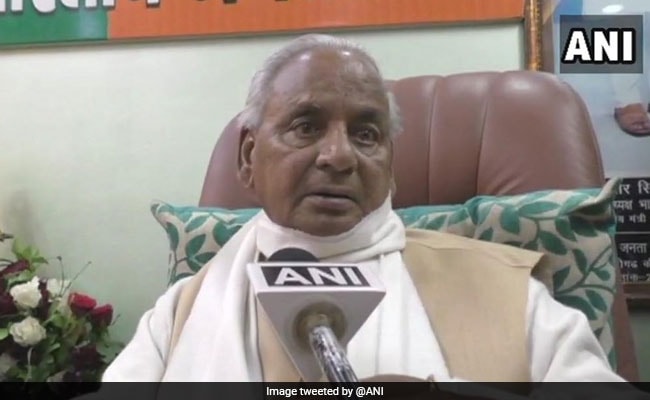 Kalyan Singh accepted the party's membership in the presence of UP BJP chief Swatantra Dev Singh.

Former Uttar Pradesh chief minister Kalyan Singh rejoined the BJP on Monday after completing his term as Rajasthan governor, a constitutional post which offered him immunity from trial for criminal conspiracy in the Babri Masjid demolition case.

The 87-year-old leader accepted the party's membership in the presence of UP BJP chief Swatantra Dev Singh.

His son Rajveer Singh, Lok Sabha MP from Etah, and grandson Sandeep Singh, minister of state for finance in Uttar Pradesh, were also present at the party office in Lucknow.

Kalraj Mishra was sworn in as Rajasthan governor on Monday after Singh completed the five-year term as governor of the state.

Mr Singh could face trial for criminal conspiracy in the Babri Masjid demolition case as the immunity he enjoyed while holding the constitutional post does not now exist.

It also clarified that Kalyan Singh, who was the chief minister of Uttar Pradesh when the Babri Masjid was demolished in 1992, could not be brought in as accused to face trial as governors enjoyed immunity under Article 361 of the Constitution.

However, the Supreme Court told the CBI to call Kalyan Singh as an accused as soon as he ceases to be the governor.

Article 361 of the Constitution confers immunity to the President and governors from criminal and civil cases during their terms of office.

Mr Singh may have to face trial unless the Centre appoints him to another constitutional post, it is argued.

According to the CBI case against Kalyan Singh, he had given an assurance before the National Integration Council as the then Uttar Pradesh chief minister that he would not allow the demolition. The Supreme Court had permitted only a symbolic "kar sewa" at the disputed site.

But he allegedly acted contrary to his assurances, according to the 1997 order of the special judge, Lucknow, subsequent to a CBI charge sheet against him in 1993.

The CBI had also alleged that as chief minister, Kalyan Singh did not issue the order for the deployment of central forces.

"From this, it seems that prima facie he was a necessary participant in the criminal conspiracy," the special court had ruled in 1997.

Kalyan Singh had resigned as the chief minister of Uttar Pradesh after the demolition of Babri Masjid on December 6, 1992.