The Pope has appointed an officer from the Vatican to coordinate with Kailash Satyarthi Children's Foundation to combat the menace, he said. 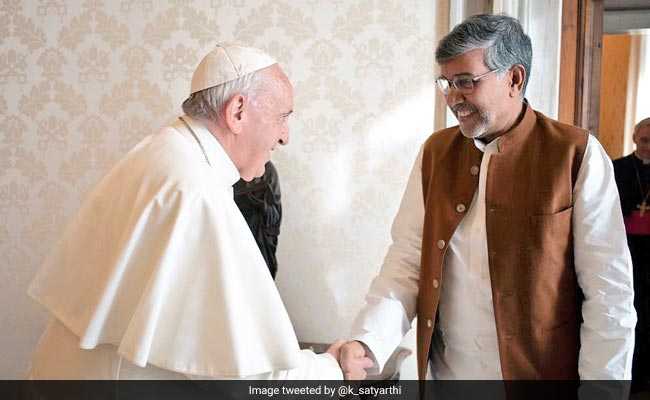 Grateful to His Holiness Pope for extending his full support to my demand," Kailash Satyarthi said.

The Pope has appointed an officer from the Vatican to coordinate with Kailash Satyarthi Children's Foundation to combat the menace, he said.

"Grateful to His Holiness Pope Francis for extending his full support to my demand for a legally binding global UN Convention against online child sexual abuse backed by a Global Task Force and dedicated international toll-free helpline to provide holistic support to victims," he said.

The extraterritorial jurisdiction for the proposed law is absolutely essential as online crimes transcend across borders, Mr Satyarthi said during his meeting with the head of the Catholic church in Vatican City.

The Nobel laureate is meeting all stakeholders irrespective of caste, creed, religion, ethnicity, political affinity and nationality to garner support for the movement.

Mr Satyarthi, who has been demanding for a new convention, has written to all the heads of states.

This request has also been submitted to the UN Secretary General and the Organisation for Economic Co-operation and Development, an intergovernmental economic organisation with 36 member countries.

The meeting between Mr Satyarthi and the Pope took place in the backdrop of him summoning the Presidents of Catholic Bishops worldwide to the Vatican in February 2019 to discuss ways to protect children and prevent sexual abuse by priests.

The Pope's response was that the meeting would definitely be a "practical meeting and come out with practical solutions", Mr Satyarthi said.

Mr Satyarthi also sought the support of the Pope for his ongoing global efforts to end child trafficking, slavery and all forms of violence against children to ensure peace, freedom, safety, health and education for them.