Jyotiraditya Scindia has been a vocal critic of his own party's government. (File)

Congress leader Jyotiraditya Scindia on Monday dismissed as "baseless rumours" the speculation caused by his new Twitter bio, which no longer mentions the party and describes him as "public servant and cricket enthusiast".

"A month back I had changed my bio on Twitter. On people's advice I had made my bio shorter. Rumours regarding this are baseless,"Jyotiraditya Scindia told news agency ANI.

Though the previous version did not specifically mention Congress either, the changed bio was interpreted by many as a sign of a split in Madhya Pradesh, where the Congress is in power. 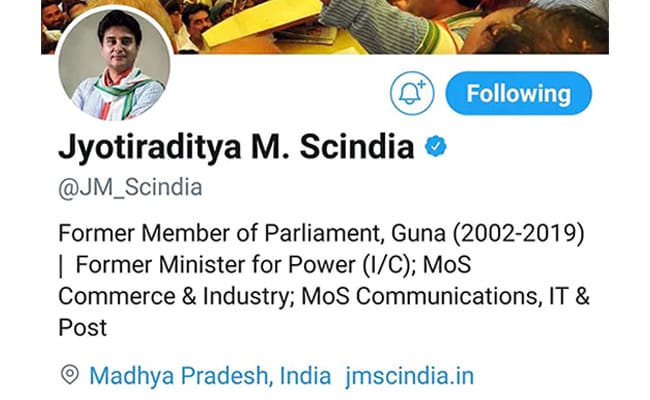 Mr Scindia has been a vocal critic of his own party's government, led by Chief Minister Kamal Nath, over the past few months.

The 48-year-old former royal is seen to be in a sulk ever since he was denied chief ministership in Madhya Pradesh after the Congress won polls in the state a year ago. He was later tasked with heading the party's national election campaign in Uttar Pradesh along with Priyanka Gandhi Vadra, but with disastrous results. The Congress managed only one of UP's 80 seats, losing even then chief Rahul Gandhi's traditional seat Amethi.

Mr Scindia lost his own seat Guna. He quit as General Secretary over the poll debacle after Rahul Gandhi quit as party president.

Mr Scindia's supporters have reportedly been pitching for him to be made party president in Madhya Pradesh, but that has been opposed by Kamal Nath - he holds the post even after becoming Chief Minister -- and another veteran, Digvijaya Singh, who are said to be more favourable to Ajay Singh, son of Arjun Singh.