Madhya Pradesh Government Crisis: In a Facebook post earlier Tuesday, Pradyot Debbarma said: "I spoke to Jyotiraditya Scindia late night and he told me that he waited and waited but there were no upcoming appointments given to him by 'our' leader". 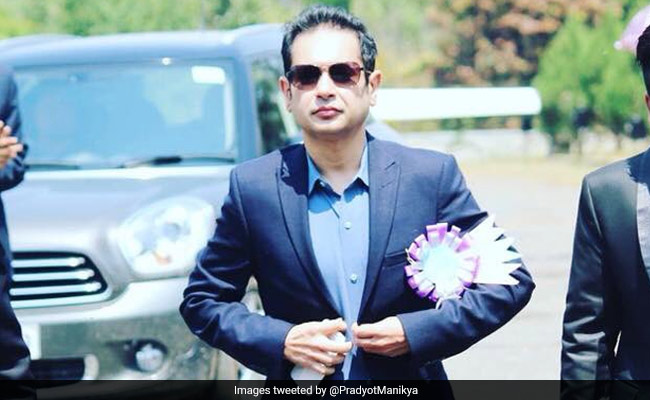 Jyotiraditya Scindia - known to be a close aide of Rahul Gandhi - had not been able to meet him despite trying for "months", Pradyot Manikya Debbarma, erstwhile Tripura royal and a cousin of Mr Scindia, told NDTV. The 49-year-old former MP from Madhya Pradesh, expelled by the Congress minutes after he resigned, is set to join the BJP.

"I know for a fact Jyotiraditya Scindia was trying to meet Rahul Gandhi for months, no appointment was given. If he (Rahul Gandhi) did not want to hear us, why did he even bring us in the party?" Mr Debbarma, the Tripura Congress chief who quit the party a few months ago, told NDTV Tuesday evening.

"When I had resigned as the President of the Congress in Tripura, I had said that the young guard feels 'orphaned' and let down after Rahul Gandhi abruptly quit as the President and left us in a lurch. Suddenly our views were sidelined and the 'Stalwarts' had started to disregard our policies on key issues," the post further read.

Rahul Gandhi had quit the party president's post last year after the Congress's disastrous performance in the Lok Sabha. With Sonia Gandhi subsequently in the driver's seat, a renewed face-off had started between the party veterans and the young brigade which had gathered around Rahul Gandhi.

Speaking of the current situation, Mr Debbarma told NDTV: "A debate is seen as an act of dissension by the old guard. When our leader is not hearing us and the old guards are picking is off one by one, then it is time to move on".

Mr Scindia was expelled from the Congress Tuesday morning shortly after he met Prime Minister Narendra Modi and Home Minister Amit Shah in Delhi. He is likely to be rewarded with a Rajya Sabha seat and subsequently a berth in the union cabinet.

The former Union minister, whose 21 loyalist MLAs resigned, bringing the Congress government in Madhya Pradesh to the brink of collapse, had sent his resignation to the party earlier. In the letter addressed to Sonia Gandhi, dated March 9, he had said "This is a path that has been drawing itself out over the last year".

Mr Scindia, a contender for the Chief Minister's post, was passed over for the top job in the government and the party's state unit after the assembly elections of 2018. He was given two jobs he was not seen to be keen on -- the charge of western Uttar Pradesh ahead of the Lok Sabha election and the screening committee of the Maharashtra election. The party also did not give a positive response to his wish of getting a definite Rajya Sabha seat.

The top Congress leadership's failure to reach out to him since yesterday, and party veterans' strong censure of his move, has raised murmurs of dissent from a section of leaders, who maintains that the Congress needs to act to reassure its young leaders and help them grow.

.@JM_Scindia's departure is a big blow to @INCIndia. He was a central pillar in the party & the leadership should've done more to convince him to stay. Like him, there are many other devoted INC leaders across the country who feel alienated, wasted & discontented. 1/2 https://t.co/oTLXuqTAui

"India's oldest party needs to empower young leaders who have the capacity to work hard & resonate with the masses," another tweet read.