Jordanian King Abdullah II is known for his global initiative to fight deradicalisation and terrorism and is also custodian of the Al-Aqsa mosque, the third holiest site in Islam, located in the Old City of Jerusalem. 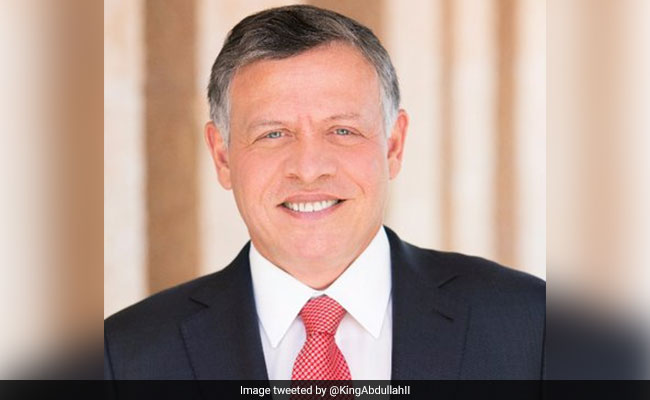 During King Abdullah II's visit, India and Jordan will look to finalise framework for defence cooperation

The king is known for his global initiative to fight deradicalisation and terrorism and is also custodian of the Al-Aqsa mosque, the third holiest site in Islam, located in the Old City of Jerusalem.

During the King's visit, both sides will aim to further boost ties in several key areas and look to finalise a framework for defence and security cooperation, they said.

The Palestinian issue, ways to deal with terrorism radicalisation and extremism are likely to figure, apart from key bilateral and regional matters, in talks between the king and Prime Minister Narendra Modi on Thursday, the sources said.

PM Modi, several senior dignitaries and representatives from leading Islamic institutions from across the country are expected to attend the special address by the Jordanian king at Vigyan Bhavan on Thursday.

The topic -- 'Islamic heritage; Promoting Understanding and Moderation' -- has been selected by the king himself, the sources said.

A translation of a book "A Thinking Person's Guide to Islam -- the Essence of Islam in 12 versus from the Quran" will also be released at the event, being organised by the India Islamic Cultural Centre.

The influential leader's India visit comes nearly three weeks after the Prime Minister visited Jordan as part of his recent trip to West Asia, including to Palestine. PM Modi's visit to Jordan was the first bilateral trip by an Indian Prime Minister in three decades.

"We attach great importance to our ties with Jordan as it is an oasis of stability and harmony in an area of conflict," said a source, reflecting on the significance of the Jordan king's visit.

The sources said both sides are expected to ink a number of agreements to expand cooperation in several key sectors including health care, IT and will look to firm a framework pact for defence and security cooperation.

In their talks, PM Modi and the king are also likely to explore ways of deepening trade ties. Twenty textile industries from India have invested around USD 300 million in Jordan.

Giving an example of the warmth in ties between the two countries, the sources said the king was traveling abroad and came back to Amman to receive PM Modi. He received PM Modi at his residence despite it being a holiday in Jordan.

He had appreciated PM Modi for undertaking a "stand alone" visit to Palestine through Amman and also for India's strong support to the Palestinian cause.

Jordan's royal helicopters had flown PM Modi and his delegation from Amman to Ramallah and back during the visit.

Promoted
Listen to the latest songs, only on JioSaavn.com
The Jordanian king, who will be accompanied by a high-level business delegation, will also call on President Ram Nath Kovind on Thursday and he will host a banquet for the visiting leader.

During his stay here, the king will also visit the Indian Institute of Technology, Delhi, to explore collaboration in areas of science and technology and will address a congregation of industry tycoons.