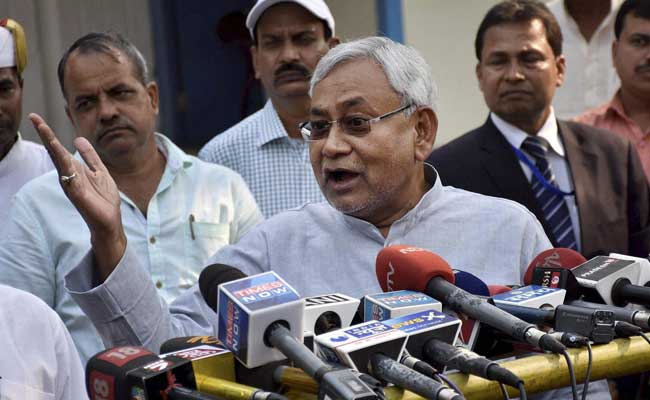 New Delhi: Bihar Chief Minister Nitish Kumar today questioned a Jawaharlal Nehru University (JNU) panel's recommendation that its students' union president Kanhaiya Kumar and other varsity scholars be rusticated for their alleged role in connection with the raising of anti-national slogans on its campus.

The Janata Dal (United) leader also wondered whether there was an attempt to "take over" the institution as he remarked that such encroachment on freedom of expression was "dangerous for democracy".

Noting that JNU is known for freedom of views, he said, "What have the students done for which they want to rusticate them. They are further deepening it (the crisis). It is clear that democratic traditions are being attacked to impose one viewpoint."

Mr Kumar was asked about the decision of a high-level JNU panel which has recommended rustication of Kanhaiya Kumar, Umar Khalid, Anirban Bhattacharya and two other students for their alleged role in a controversial event last month during which purported anti-national slogans were raised.

A decision on the recommendation of the panel will be taken by JNU Vice Chancellor M Jagadesh Kumar and Chief Proctor A Dimri.

Saying that the majority of JNU does not accept the ideology of Rashtriya Swayamsevak Sangh (RSS), Mr Kumar wondered whether "there is an attempt to take over (the university)".

"All that is being done is totally inappropriate. Unnecessarily, a crisis is being created at JNU. In my view, registration of the case against them was inappropriate. So far, no evidence has been provided which proves sedition. Even the videos that were circulated have turned out to be doctored," said the Chief Minister.

"Trying to check the freedom of expression in this manner is dangerous for democracy," he told reporters after a meeting with Union Transport Minister Nitin Gadkari.

During his meeting with Mr Gadkari, the Bihar Chief Minister took up issues related to land acquisition for highway construction in Bihar arising out of what he claimed was the National Highway Authority of India (NHAI)'s failure to provide compensation for land at four-times the market price as laid down in the new land acquisition law.

He also discussed the matter of repairs to the dilapidated Ganga river bridge in Patna. "The talks were positive," Mr Kumar said.