"Efforts to get Masood Azhar Saheb designated as global terrorist were on since Manmohan Singh's time," the former Bihar Chief Minister said. 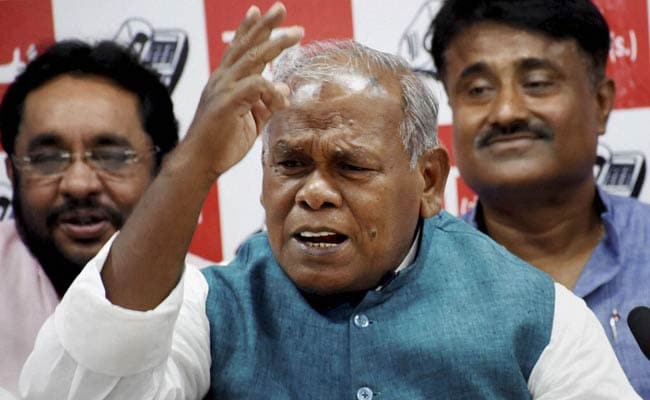 Jitan Ram Manjhi has clearly said that it was a ''slip of tongue'', party release said (File)

"PM does branding of everything which is wrong. Efforts were on to get Masood Azhar Saheb designated as global terrorist since Manmohan Singh's time but it was just a coincidence that the decision has been taken now. I think that this is not correct for BJP or Narendra Modi to take credit for this," Mr Manjhi was quoted by news agency PTI as saying.

Pakistan-based terrorist Masood Azhar was designated a global terrorist by the UN Security Council in a diplomatic win for India on Wednesday. China, which had blocked moves to blacklist Masood Azhar four times, finally dropped its objections saying it "found no objection after a careful study of revised materials".

The UN decision meant a freeze on Masood Azhar's finances and assets, a travel ban and an arms embargo.

"In our fight against terrorism, it is a big victory," Prime Minister Narendra Modi had said.

Video of Mr Manjhi's comment has been widely circulated on social media. He further said, "Had Vajpayee government not taken Masood Azhar Saheb to Kandhar in plane his game was over then only."

"By addressing Masood Azhar as Saheb, Jitan Ram Manjhi has proved that the Congress and its allies have soft corner for terrorists. Is it in their political agenda to glorify those who kill innocent people of the country. Please reply Manjhi Saheb," Bihar BJP leader Mangal Pandey tweeted in Hindi.

Mr Manjhi, a former ally of the BJP, entered into alliance with Lalu Yadav's RJD, the Congress, and Upendra Kushwaha's RLSP ahead of the national election.

His party tried to downplay the comment, saying it was only a slip of the tongue.

"Jitan Ram Manjhi ji always addresses people with respect but he has clarified his position before the media with regard to his comment on Masood Azhar. Jitan Ram Manjhi ji has clearly said that it was a ''slip of tongue''. He also said that probity and dignity in politics also does not warrant anyone to abuse anyone which the BJP has been doing," a party release said.

Masood Azhar, chief of Jaish-e-Mohammed, has perpetrated many terror attacks in India, including the recent Pulwama terror attack in which 40 CRPF soldiers lost their lives.

Armed with veto powers in the UN Security Council, China had blocked recent moves to blacklist Azhar by placing a "technical hold" and asking for "more time to examine" the proposal.