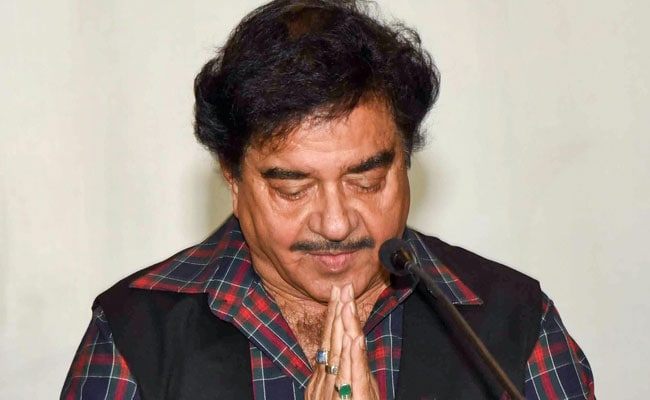 Shatrughan Sinha spoke at election rally in Baghmara in support of Congress candidate.

Former union minister and Congress leader Shatrughan Sinha on Thursday said he has no personal enmity with anyone and raised voice against demonetisation and implementation of Goods & Services Tax (GST) in the interest of the people.

Addressing an election rally at Baghmara constituency in support of Congress candidate Jaleshwar Mahato, Mr Sinha said "for me, the nation comes first, above party."

Mr Sinha had launched scathing attack at the BJP leadership on the issues of demonestisation and GST among others before leaving it to join Congress on the eve of general election.

He lost to Union minister Ravi Shankar Prasad in 2019 Parliamentary polls from Patna Sahib constituency, he had represented twice before that.

"People elected me with a huge mandate. So, it is my responsibility to defend their welfare. When demonetisation and GST hurt the people, including small traders and women, I protested for them, as for me, the nation comes first, above party," Mr Sinha added.

The actor-turned-politician said he was ''pained'' to learn how the women had to spend from their years of savings that they did with good intention to meet expenditures during an emergency.

Baghmara, which is in Dhanbad district, goes for the fourth-phase polling on December 16.

"I have no personal enmity with anyone. I have raised only issues related to the people," Mr Sinha, who served in the union cabinet under Atal Bihari Vajpayee, said.

A former Jharkhand unit president of the Janata Dal (United), Mahato had been a minister in a BJP-led NDA government before joining the Congress some months ago.

He is backed by the Jharkhand Mukti Morcha and the RJD following a pre-poll opposition alliance with the Congress.