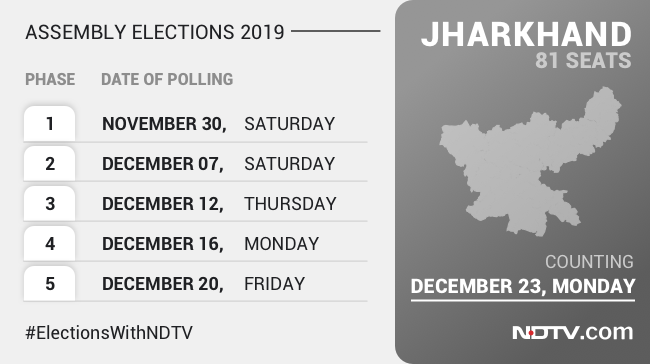 Election in Jharkhand 2019: Jharkhand will also be the third BJP-ruled state to hold elections this year.

Jharkhand Assembly Elections 2019 will take place in five phases starting November 30. The Jharkhand election results will be declared on December 23, the Election Commission announced on November 1. Voting dates for the five phases will be November 30, December 7, December 12, December 16 and December 20. There are 81 constituencies in Jharkhand, of these, 13 constituencies will vote in the first phase, 20 in the second phase, 17 in the third, 15 in the fourth phase and 16 constituencies will vote in the fifth phase. The assembly polls in the Maoist-affected state, which has a large tribal population, were held in five phases in 2014 as well. The Jharkhand election will be the third state poll since Prime Minister Narendra Modi led the BJP to a massive win in Lok Sabha elections in May. Jharkhand will also be the third BJP-ruled state to hold elections this year after Maharashtra and Haryana, which voted on October 21.

In 2014, the BJP, which won 35 seats formed the government along with All Jharkhand Students' Union (AJSU) which had won 5 seats and Raghubar Das took over as the Chief Minister. JMM finished second in the tally with 17 seats while Congress was decimated to just six assembly seats. BJP-led National Democratic Alliance (NDA) had won 12 out of 14 parliamentary seats in 2019 general elections in the state.

Which are the key parties in Jharkhand?

How many candidates will contest in Phase 1 Jharkhand elections?

A total of 189 candidates will contest 13 of the 81 assembly seats in Jharkhand. Around 228 candidates filed their papers for the first phase. Of these 22 nominations were rejected after scrutiny and 17 candidates had withdrawn their papers.

Which all constituencies are fighting in Phase 1 of Jharkhand Assembly Elections?

Chatra has the least number of candidates while Bhawanathpur has the most.

Who are the key candidates for Phase 1 Jharkhand elections?

Who are the star campaigners from BJP for Jharkhand Assembly Elections?