Rohit Chaudhary, whose brother Samrat is with the BJP and a minister, showered encomiums on the chief minister, JD(U)'s de facto leader, after joining the party at its state headquarters. 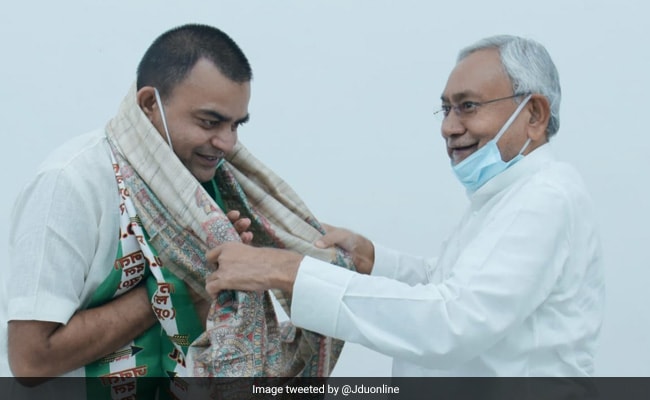 The assembly segment has a predominance of Yadavs and Koeris

Bihar Chief Minister Nitish Kumar's JD(U) on Tuesday inducted the of a son of a veteran politician who holds considerable sway over Tarapur assembly constituency, where a by-poll is scheduled later this month.

Rohit Chaudhary, whose brother Samrat is with the BJP and a minister, showered encomiums on the chief minister, JD(U)'s de facto leader, after joining the party at its state headquarters.

The move is, however, seen as an attempt at “damage control" by assuaging the Chaudhary brothers' father Shakuni Chaudhary, who had represented Tarapur a record seven times. Despite having announced retirement from active politics, he remains popular in the area.

A party hopper, Mr Chaudhary has represented the seat as an Independent as well as on tickets of the Congress, Samata Party and its later avatar the JD(U), besides the RJD founded and headed by Mr Kumar's arch rival Lalu Prasad.

During the state election last year, Mr Chaudhary is said to have lobbied hard with BJP to ensure that one of his sons was fielded from Tarapur. However, as per NDA's formula, the seat went to the JD(U) and it reposed faith in sitting MLA Mewa Lal Chaudhary who had, notably, wrested the seat from Shakuni Chaudhary himself in 2015.

Mewa Lal Chaudhary of JD(U) had retained the seat but lost his life to COVID-19 earlier this year. The party has now fielded Rajiv Kumar Singh who belongs to the same Koeri caste as the Chaudharys (Shakuni and Mewa Lal).

The assembly segment has a predominance of Yadavs and Koeris and all MLAs here so far have been from either community.

The ruling JD(U) had won the seat last year by a margin of less than 7,000 seats. With its tally in the assembly having hit an all-time low, the party seems to be working overtime to ensure an emphatic victory in Tarapur as well as in Kusheshwar Asthan where a by-poll has been necessitated by the death of sitting MLA Shashi Bhushan Hazari.

The JD(U)'s bid ito retain Tarapur is receiving the primary challenge from RJD, last year's runner up, which has upended caste equations by fielding a Vaishya from the seat.

With no other Yadav candidate is in the fray, the party is confident of garnering votes of the sizeable community for which the RJD has been the first choice for many decades.

Any dent in Vaishya votes will be trouble for the BJP-led NDA since the community is known to be supportive of the BJP. It is being lured by RJD with the promise of an MLA “of their own” for the first time. The pitch has been queered with the Congress – a junior ally of the RJD – and Chirag Paswan's faction of LJP also throwing their hats in the ring.

The Congress and the LJP (Ram Vilas) have fielded Brahmin and Rajput candidates respectively and a split in the votes of the upper castes, traditionally supporters of the BJP, would similarly spell trouble for the NDA which is backing the JD(U) candidates in the Bihar by-polls.

Voting for the two seats is scheduled to take place on October 30.