Jan Aakrosh Rally: Sonia Gandhi was speaking at a rally attended by Rahul Gandhi and other top Congress leaders. 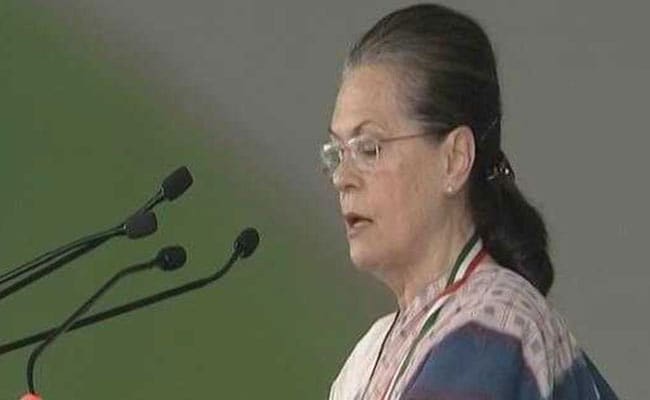 New Delhi: Former Congress president Sonia Gandhi today attacked the Narendra Modi government at a mega rally led by the  party in Delhi, saying the roots of corruption have become stronger under the BJP-led NDA regime.

She questioned PM Modi on his commitment to root out corruption. "Modiji had said 'na khaunga na khane dunga' (Won't take bribes, Will not let others take bribes). But corruption has increased," she said at the rally in Delhi's Ramlila grounds.

Congress president Rahul Gandhi, who led the Jan Aakrosh rally, launched a full scale attack on PM Modi and his government, questioning why the "chowkidar" was silent on corruption and weakening of institutions.

"The name of this rally is the 'Jan Aakrosh' rally. Wherever I go these days, I ask a simple question to the people - 'Are you happy'. And I get the same answer - 'No'," Mr Gandhi said.

"Judiciary is passing through an unprecdented crisis. Media can't play is role, it is being stopped from doing so...It is a sensitive phase we need to take seriously...we will fight this on behalf of the people," she said at the rally, attended by thousands of Congress workers.

Promoted
Listen to the latest songs, only on JioSaavn.com
"The constitutional institutions are under threat in the current government. It is not good for the democracy. It is our duty to strengthen the democracy by strengthening the Congress party and supporting Rahul Gandhi in his mission," Manmohan Singh said.