The fate of over 3,000 candidates was decided in Jammu And Kashmir urban local body polls. 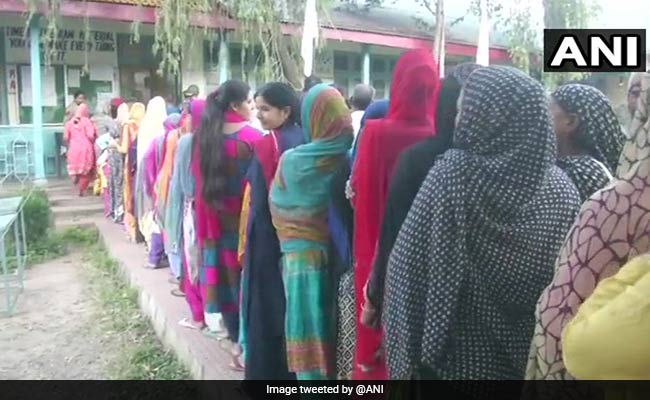 Visuals from a counting centre in Udhampur, Jammu and Kashmir, on Saturday.

The Bharatiya Janata Party performed well in the Jammu and Kashmir local body elections. The BJP secured a major victory in polls to the Jammu Municipal Corporation, the votes for which were counted today, but did not do as well in other districts of the Jammu province. The BJP's second-best showing was in Kathua, a district that has long been in the news over the rape and murder of a nomadic girl by alleged right-wing activists, with 34 of 80 wards. While the Congress won 19 wards in the district, Independent candidates scored 27.

Here are the highlights of the Jammu And Kashmir municipal election counting day:

Oct 21, 2018 00:01 (IST)
As BJP performed well in the Jammu and Kashmir local body elections, Prime Minister Narendra Modi today said his party will work hard to fulfill the aspirations of the people.
Oct 20, 2018 18:05 (IST)
National Panthers Party leader Harsh Dev Singh tells ANI that the victory of the Bharatiya Janata Party in municipal elections "is manipulated."
"There has been massive rigging and the voting machines were doctored. We made several complaints with the election authorities on this issue but no cognizance was taken," he adds.
Oct 20, 2018 17:55 (IST)
"In Jammu Municipal Board there are 75 wards and the BJP won 43 seats, Indian National Congress won 14 seats and Independent candidates won 18 seats. In municipal committees, there are seven wards. Of them, the BJP has won two seats, INC has won four seats and independent candidate bagged one seat," says election commission in Jammu and Kashmir, according to news agency ANI.
Oct 20, 2018 17:34 (IST)
In the Jammu region that includes the districts of Jammu, Samba, Kathua, Reasi, Doda, Kishtwar, Ramban, Udhampur, Poonch and Rajouri, the BJP candidates have won 212 wards, the Congress 110, National Panthers Party 13 and Independents 185.
In the Valley, with Srinagar, Baramulla, Kupwara, Badgam, Anantnag, Pulwama, Shopian, Kulgam, Bandipora and Ganderbal as its districts, the Congress has won 79 wards, the BJP 75, independents 71, Peoples Conference two and others two.
Independents supported by former minister and Peoples Conference Chief Sajad Gani Lone won all the 13 seats in the Handwara municipal committee polls in Kupwara.
Oct 20, 2018 17:29 (IST)
The BJP has emerged as the clear winner of Jammu province in the urban local body polls, the counting for which was held today. The party managed to secure seven of the region's 10 districts, taking advantage of the absence of two political giants to expand its overall presence in the state.
Oct 20, 2018 16:43 (IST)
Former Chief Minister of Jammu and Kashmir Omar Abdullah says the Congress has a lot to worry about.

Oct 20, 2018 14:43 (IST)
Congress leader Nazia, who won the election from ward number 16, tells news agency ANI: "Total 56 votes were cast in which the BJP got seven votes, independent candidates got 10 and the rest were mine. The boycott did not affect the voting."
Oct 20, 2018 14:11 (IST)
The BJP has failed to open its account in Jammu and Kashmir's Ladakh region, according to news agency IANS. Out of the total 26 wards in this region, the Congress bagged all the 13 seats in Leh municipal committee. It also won five wards in neighbouring Kargil district, election officials said.
Six seats in the region have gone to independent candidates, while the result of only two seats is awaited, they said.
Oct 20, 2018 13:34 (IST)
The counting of votes of Anantnag and Mattan -- the other two civic bodies in south Kashmir -- is going on and the results are expected later today.
Oct 20, 2018 13:29 (IST)
The BJP gets simple majority in Qazigund Municipal Committee, winning four of the seven wards. The other three wards has no candidates. In Pahalgam municipal committee, the BJP wins seven of the 13 seats uncontested, while there were no candidates for the remaining six seats.
The Congress wins thumping majority in Dooru municipal committee, the stronghold of JKPCC chief GA Mir. It has bagged 14 of the 17 seats, while the BJP managed to win two seats. One seat remains vacant.
Congress has also won in Kokernag municipal committee, bagging six of the eight seats. In Yaripora, the party has bagged three seats, while the remaining three seats were vacant due to absence of candidates.
Independents bagged 13 seats in the polls.
Oct 20, 2018 13:23 (IST)
The results of 94 wards of south Kashmir have been declared so far in which the Congress has managed to win 28 seats. The party, thus, will have control of at least three municipal bodies.
The Bharatiya Janata Party (BJP) did well in Shopian where its candidates have won in 12 wards unopposed. Five wards in the district did not have any nominations.
In Devsar municipal committee, the BJP has won all the eight seats. The area is represented by Congress leader Mohammad Amin Bhat in the legislative assembly.
Oct 20, 2018 13:22 (IST)
The Bharatiya Janata Party (BJP) wins the urban local body elections in four districts of militancy-infested south Kashmir, reports news agency PTI.
The BJP has won 53 of the 132 wards.
The unprecedented victory for the saffron party has given it control of at least four of the 20 civic bodies in the four districts of Anantnag, Kulgam, Pulwama and Shopian.
Oct 20, 2018 12:21 (IST)
Congress wins all 13 municipal wards in Leh, in a blow to Bharatiya Janata Party.
Oct 20, 2018 11:08 (IST)
According to news agency ANI, Indian National Congress wins seats in Ganie Mohalla, Khanpora, Wahadatpora, Bazar Mohalla, Karipora and Kharpora municipal wards.
The Bharatiya Janata Party wins Narispora, Housing colony Ompora, Dobi Mohalla and Mohanpora municipal wards, in Budgam, says ANI.
Oct 20, 2018 10:18 (IST)
Visuals from a counting centre in Doda.

Counting of votes for 52 civic bodies to be held across Jammu and Kashmir today; Visuals from a counting centre in Doda. #JammuAndKashmirpic.twitter.com/RjVoBTlWbT