The Union Territory administration has come under severe criticism for its failure to clear snow from roads, which has brought life to a standstill in Kashmir after a week of heavy snowfall.

Locals in Kashmir have manually started clearing snow from roads on their own.

As heavy snowfall in Kashmir snapped road and air links, the Union Territory administration has come under severe criticism for its failure to clear snow from roads, which has brought life to a standstill in the valley. Many areas in the hinterlands remain cut off even three days after it stopped snowing.

Record snowfall over the past week prevented ambulances from reaching patients, forcing locals to carry the dead and ailing on their shoulders for many miles. While the Army and the Air Force came to their assistance, locals said the administration has remained missing.

Left to fend for themselves, the locals have started shovelling snow on their own. 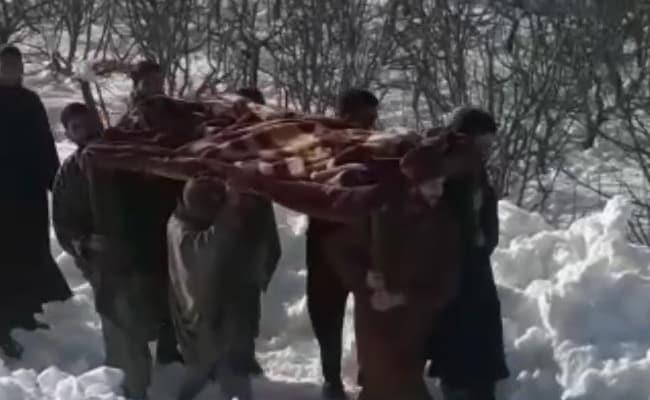 Locals have had to carry the dead and ailing on their shoulders for many miles as ambulances could not reach them.

"The young and the old had to come out and clear the snow. We did manually; there was no assistance from the government," a local told NDTV in Shopian, where a group of people carried a dead body for at least 10 miles as the road link to their village remained closed.

The problem is widespread.

In Srinagar's Aloochi Bagh neighbourhood, Parminder Singh is clearing snow to take his father for dialysis, which has already been delayed.

"No one from the municipality has come here. My father is on dialysis. For last eight days, we could not go out for his dialysis and that's reason I had to clear the snow myself," Parminder Singh said.

Officials said they have already cleared more than 80 per cent lanes and by-lanes in Srinagar and the delay in response was due to lack of snow clearing machines.

However, heavy and long spells of snowfall are a winter regular in the region.

The administration's lack of preparedness was highlighted when it ordered fuel rationing, including that of domestic cooking gas cylinders, just three days after it started snowing around the New Year's Day.

Meanwhile, fresh traffic was allowed on the Jammu-Srinagar Highway as the 260-km road was reopened on Sunday after a week. The highway - the only all-weather road connecting Kashmir with the rest of the country - was cleared on Friday but only stranded passengers were allowed to go.

Flight operations were briefly affected on Sunday, when some parts of the valley, including Srinagar, received light snowfall.