Is Chinese activity on the Ladakh border a cause for concern? 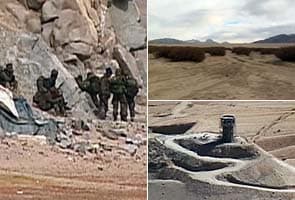 Demchok, Leh: To the outsider, Demchok in Leh is a small nondescript village. But this village along which runs the Line of Actual Control (LAC) is an area where Indian and Chinese troops claim stretches as their own.

Both countries assert their ownership by sending out frequent patrols, and whenever Indian and Chinese troops come face to face, they show banners and lay claim shots on the territory, which asks the other to retreat. The last such incident in this sector took place on August 28.

In the last one year, over a dozen transgressions have been reported by either side, and yet, as military officials are quick to stress, the borders remain calm. Brigadier Anil Choudhury, Commander Kiari Brigade says: ''There have been no intrusions ... and as far as transgressions are concerned they are far and few. The existing mechanisms of border personnel meetings and banner drills are good enough to take care of these and these meetings happen in a cordial atmosphere.''

However, Chinese activity on their side of the LAC is a source of some concern for India. Indian surveillance reveals a People's Liberation Army (PLA) truck showing the Chinese flag driving on a hard, metalled road shots of their observation post. That's not all. There is enough evidence that more and more infrastructure is coming up on the Chinese side: new huts for the nomads of the region a community centre, and barracks, all of which could have dual purpose - civil and military. The Indian Army suspects these are supply dumps that also act as PLA shelters - a new three-storied observation tower of the Chinese army is also coming up - construction for which started in August.

Till 2006 none of this existed. The spurt in infrastructure build-up started before 2008 Beijing Olympics when China expected trouble in Tibet a few km away from Demchok. At Dumchelle, a few kilometres away there are more signs of Chinese vigil - a newly-constructed observation post

Promoted
Listen to the latest songs, only on JioSaavn.com
The world's largest undemarcated border between two rising nations is a cause for tension, but so far both sides have taken enough measures in these inhospitable areas to prevent any serious flare up in the past decade. Experts say the Chinese activity calls for constant vigil but not undue panic.

Line of Actual ControlChinese activity along the border