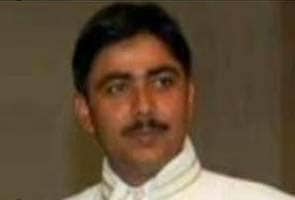 The incident occurred on Thursday afternoon when the officer, who was on patrol in his official jeep, noticed a tractor-trolley loaded with stones following which he overtook it and signalled the driver to stop it, Deputy Inspector General (DIG) Chambal Range, DP Gupta told reporters in Gwalior.

However, when the driver did not budge, he again crossed it and this time stood in front of the vehicle in order to bring it to a halt on the spot.

But the tractor driver, identified as Manoj Gurjar, instead of stopping the vehicle, sped and hit the 30-year-old officer, crushing him under the wheels.

Following the incident, the officer was rushed to a hospital in Gwalior, where he was declared brought dead, the DIG said adding prima facie it appears that the mining mafia active in the area is behind the incident.

Gurjar has been arrested and a case has been registered under section 302 of the Indian Penal Code (IPC) against him.

Mr Singh was a dynamic officer, who had seized many vehicles carrying illegally mined stones and sand. Police sources say his killing may have been planned.

The state government has promised a thorough inquiry. "Our preliminary investigations say that the stones were illegally mined. And we are looking at whether the murder of the IPS officer was planned or not, it will come out in the investigation," said state Home Minister, Uma Shankar Gupta, who had rushed to Gwalior to take stock of the situation.

Soon after Mr Singh was transferred from Ujjain in December last year, he took on the mining mafia in Bamor in Morena district. Sources say he had complained about rampant loot of sand and boulders from the Chambal region, but he was not getting any support.

The 2009 batch IPS officer is survived by his wife Madhu Tewatiya, an IAS officer, who's pregnant and is in Delhi right now.

Promoted
Listen to the latest songs, only on JioSaavn.com
Illegal mining has been rampant in Madhya Pradesh for many years now, but this is the first time a senior police officer has been killed, creating a sense of fear among IPS officers in the state.