International Yoga Day: The lead event of Yoga Day will be a televised programme this year due to the pandemic and will be shown on all Doordarshan channels from 6:30 am. 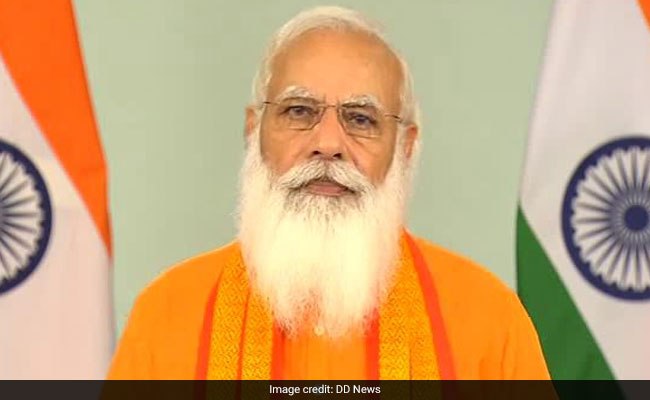 International Yoga Day Updates: The event will also include a live yoga demonstration.

Prime Minister Narendra Modi today said yoga remains a "ray of hope" as the world fights the coronavirus pandemic and asserted that in these difficult times it has become a source of inner strength."When Covid emerged, no country was prepared. At this time yoga became a source of inner strength. Yoga helps in self-discipline, it inculcated faith in people that they could fight this virus. Frontline warriors told me that they made yoga a tool in fighting the virus," PM Modi, who was dressed in an orange kurta, said.

PM Modi also said that in collaboration with the World Health Organization (WHO) India will launch the M-Yoga application, which will have many videos of yoga training based on Common Yoga Protocol available in different languages of the world.

This will help us in making the ''One World, One Health'' motto successful, he said.

International Yoga Day is celebrated on June 21 every year. The 2021 theme for Yoga Day is "Yoga for Well-Being", according to the United Nations website.

Here are the Highlights on International Yoga Day 2021:

Indians Missions across the world have marked #YogaDay with great enthusiasm. The Yoga sessions world over drew several people. https://t.co/YKOtvmJh4V

The world is realising the benefits and the uniting potential of Yoga.

Jun 21, 2021 17:14 (IST)
Over 1,500 inmates perform yoga inside 3 Delhi prison complexes
Over 1,500 inmates across three jail complexes in the national capital performed yoga on on International Day of Yoga, officials said.
A senior jail official said prisoners from Tihar, Rohini and Mandoli gathered in the common area maintaining social distancing norms.
The trained inmates and staff lead the session which took place between 7 am to 9 am, the official said.
Director General (Prison) said, "We organized a magic show and a tug-of-war competition along with the yoga session in jail number 5 where the inmates between 18 to 21 years are lodged, while maintaining proper social distancing. The response was very good."
Jun 21, 2021 14:27 (IST)
Indian High Commission expresses gratitude to Sri Lankan PM for performing Yoga session
Indian High Commission in Colombo on Monday expressed gratitude to Sri Lankan Prime Minister Mahinda Rajapaksa and his wife Shiranthi Rajapaksa for sharing a glimpse of yoga sessions on seventh International Day of Yoga (IDY 2021).

In a photograph shared by the commission, Mahinda Rajapaksa along with his wife Shiranthi Rajapaksa seen performing a Yoga session.
Jun 21, 2021 13:27 (IST)
Delhi Police organises special yoga sessions for its personnel
The Delhi Police on Monday organised special yoga sessions for its personnel deployed across various units on the occasion of seventh International Yoga Day.
Delhi Police Commissioner SN Shrivastava posted pictures of him and his wife performing different ''asanas''.
Jun 21, 2021 12:28 (IST)
Indian Embassy in Rome celebrates 7th International Day of Yoga
The Indian Embassy in Rome on Monday celebrated the seventh International Day of Yoga (IDY 2021).
The event started with the lighting of a lamp, ANI reported.
Jun 21, 2021 11:17 (IST)

The theme this year amidst #COVID19 was 'Be With Yoga Be At Home' encouraging people to practice Yoga for wellness at home. pic.twitter.com/N8jrb9G28D

Jun 21, 2021 10:15 (IST)
Relevance Of Yoga Increased During COVID-19, Says Harsh Vardhan
On the occasion of the seventh International Day of Yoga, Union Health Minister Harsh Vardhan on Monday said that the relevance of Yoga has increased during COVID-19 and asserted that Yoga has helped people to maintain physical and mental health.
After performing Yoga at Maharaja Agrasen Park in New Delhi, Mr Vardhan said, "Relevance of Yoga has increased during COVID-19. Yoga has helped us to maintain our physical and mental health. We should make Yoga or other physical activities a part of our daily life. These will help us to increase our immunity against coronavirus."
Jun 21, 2021 09:59 (IST)
International Yoga Day Is Celebrated Every Year On June 21
The UN General Assembly in 2014 overwhelmingly adopted a draft resolution, declaring June 21 as International Yoga Day. A record 177 countries supported the resolution.
As per the UN website, the theme for Yoga Day this year is "Yoga for Well-Being" and how the practice of yoga can promote the holistic health of every individual.
Jun 21, 2021 09:58 (IST)

Chhattisgarh CM Bhupesh Baghel performs yoga at his residence in Raipur, on #InternationalYogaDaypic.twitter.com/Ueu40nSxxX

"I am sure #yoga will continue to play preventive and promotive role in healthcare of masses": PM Narendra Modi on #InternationalYogaDaypic.twitter.com/3CSGr0C6sx

When Covid Hit, No Country Was Prepared; Yoga Helped: PM Modi
Yoga became a source of inner strength among people amid the Covid pandemic and inculcated faith in them that they could fight the virus, Prime Minister Narendra Modi said today."
Jun 21, 2021 07:01 (IST)
PM Modi Announces M-Yoga App
International Yoga Day 2021: "When India proposed International Day of Yoga in the United Nations, it was the spirit behind it to make this yoga science accessible to the whole world. Today, India has taken another important step in this direction along with United Nations, WHO," says PM Modi. "Now the world is going to get the power of M-Yoga app. In this app, many videos of yoga training will be available in different languages of the world based on Common Yoga Protocol," he adds.
Jun 21, 2021 06:55 (IST)
Yoga Gives Us A Happier Way Of Life: PM Modi
International Yoga Day 2021: "Yoga shows us the way from stress to strength and from negativity to creativity. Yoga takes us from depression to ecstasy and from ecstasy to prasad," says PM Modi. "If there are threats to humanity, Yoga often gives us a way of holistic health. Yoga also gives us a happier way of life. I am sure, Yoga will continue playing its preventive, as well as promotive role in healthcare of masses," he adds.
Jun 21, 2021 06:51 (IST)
Yoga Helps In Healing Process: PM Modi
International Yoga Day 2021: "Today even medical science lays emphasis on the healing process, besides medical treatment. Yoga helps in healing process," says Prime Minister Narendra Modi. "Doctors have used Yoga as an armour to treat patients. There are pictures of hospitals, with doctors, nurses teaching yoga performing breathing exercises like Anulom Vilom Prāṇāyāma. International experts have said that these exercises strengthen the breathing system," he adds, according to news agency ANI.
Jun 21, 2021 06:47 (IST)
People's Enthusiasm For Yoga Has Increased: PM Modi
International Yoga Day 2021: "For most of the countries of the world, Yoga Day is not their age-old cultural festival. In this difficult time, people in so much trouble could forget it, ignore it. But on the contrary, people's enthusiasm for yoga has increased, love for yoga has increased," says PM Modi.
"When the invisible coronavirus had knocked the world, then no country was prepared for it, by means, by strength and by mental state. We all have seen that in such difficult times, yoga has become a great medium of self-confidence," he adds.
Jun 21, 2021 06:43 (IST)
As World Fights Covid, Yoga Remains A Ray Of Hope: PM Modi
"Today, when the whole world is fighting the corona pandemic, yoga remains a ray of hope. Even though major public events have not been organised in countries around the world and in India for two years, the enthusiasm for Yoga Day has not diminished," says PM Modi.