In the run-up to International Yoga Day, PM Modi has taken to social media to share the intricacies of various asanas. 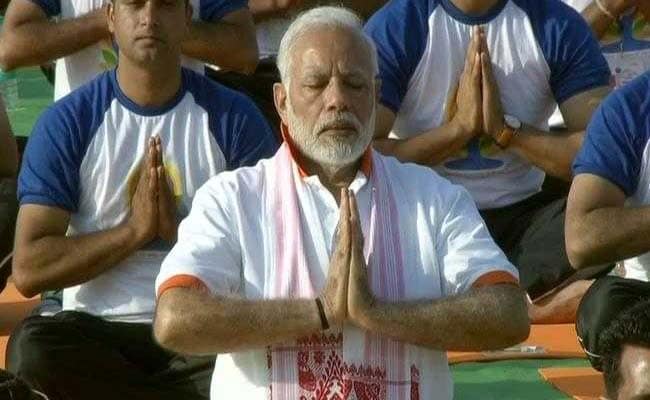 Here are the live updates of International Yoga Day celebrations:

#InternationalYogaDay2018 observed at the Airports Authority of India in Delhi pic.twitter.com/Z1Ygn4nhQ9

International Yoga Day: People from all walks of life practiced yoga asanas (postures) under tarpaulins in the premises of Nepal Police Academy

2 Lac+ Yogis have gathered in Kota to practice Yog on #InternationalDayofYoga2018. Yog is the best way for the students to de-stress themselves. Thousands of students, have joined #YogainKota, the education capital of Rajasthan pic.twitter.com/g9cr9tbA4J

I urge people around to world to embrace Yoga.

I also request people to share the joys of Yoga with others by teaching Yoga particularly to today's youth. This way we can create a healthier planet. pic.twitter.com/aaUFOGXHvi

In a world where non-communicable diseases, stress and lifestyle related ailments are rising, Yoga can play a central role in mitigating these diseases to create a healthy mind and body.

It was such a blissful experience to participate & perform Yoga along with thousands of people in the morning of #InternationalYogaDay2018 at Ahmedabad. pic.twitter.com/JAw06hFiz6

Attended #InternationalYogaDay2018 celebrations at Raj Bhawan in Lucknow today. Yoga is India's gift to the world. Glad to see the citizens of Lucknow showing tremendous enthusiasm for yoga and fitness. #HumFitTohIndiaFitpic.twitter.com/n5s6E0xwth

Yoga should be a part of our daily lives: Venkaiah Naidu

I want it to become a people's movement because it is not something political or religious, it is for betterment of our lives. It shouldn't be just for one day, it should be a part of our daily lives: Vice President Venkaiah Naidu in Mumbai on #InternationalYogaDay2018. pic.twitter.com/FUfuaFfvyF

Yoga being performed at the US Embassy in Delhi on #InternationalYogaDay2018. pic.twitter.com/YM42gKUtmp

Indian Army personnel take part in a yoga session in Secunderabad on #InternationalYogaDay2018.

On this #InternationalYogaDay2018, let us all take a pledge to practice Yoga everyday to achieve a better physical, mental and spiritual health. Sharing few pictures from a Yoga programme attended in Noida today. pic.twitter.com/QjtsoGIsMp

HM Shri @rajnathsingh performing yoga in Lucknow at a function organised to mark #InternationalYogaDay2018 at Raj Bhawan in Lucknow. pic.twitter.com/Y0yyvcRz9u

#Yoga is an art of living, a way of being, it is about finding one's true Self & connecting with it. On 21 June, join #YogaDay celebrations pic.twitter.com/saEzTvEW8P 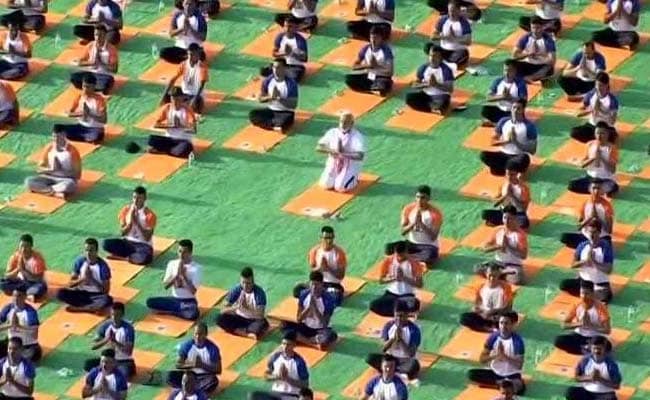 "Yoga has the best of our past and present and a ray of hope for our future": PM Narendra Modi on #InternationalYogaDay2018

Yoga has emerged as the biggest unifying force in the world: PM

The way to lead a calm, creative & content life is Yoga. It can show the way in defeating tensions and mindless anxiety.
Instead of dividing, Yoga unites.
Instead of further animosity, Yoga assimilates.
Instead of increasing suffering, Yoga heals: PM

Jun 21, 2018 07:07 (IST)
"If we regularly practice pranyam and asanas, we can minimise illness around us. Yoga plays an important role in promoting health. I urge all the people in the nation to practice yoga and those too who have never tried it," PM Modi
Jun 21, 2018 07:03 (IST)
Yoga has shown the world the way from illness to wellness: PM Modi
PM Modi said that Yoga was the perfect solution to the problems we face every day and that the way to lead a calm life is yoga adding that it helps in defeating anxiety. "Practicising yoga helps in spreading peace, brotherhood," he said.
Jun 21, 2018 07:02 (IST)
From Stockholm to Sao Paolo, Yoga is influencing lives of millions: PM Modi
Jun 21, 2018 07:01 (IST)

PM Modi said Indians should be proud of their traditions and only then the world will be proud of them. He further said that the world has embraced yoga today. "In fact, Yoga day has become one of the mass movements for good health and well-being," he added.

Jun 21, 2018 07:00 (IST)
"When divisional forces come to power, it breaks things. Amidst all of that, Yoga unites a person's soul, mind and body. It also unites a person with his or her family and then society which in turn spreads humanity across the world," PM Modi
Jun 21, 2018 06:58 (IST)
People across the country are welcoming the sun. From Dehradun to Dublin, there's only Yoga. Be it the tall mountains of Himalaya or deserts of Rajasthan, Jakarta to Johanesburng, Yoga is inspiring people everywhere, says PM Modi
Jun 21, 2018 06:58 (IST)
The mountains here have always inspired people for Yoga and Ayurveda. Even when the simplest of men come here, they have a different kind of experience
Jun 21, 2018 06:45 (IST)
Navy personnel perform yoga at eastern naval command in Visakhapatnam 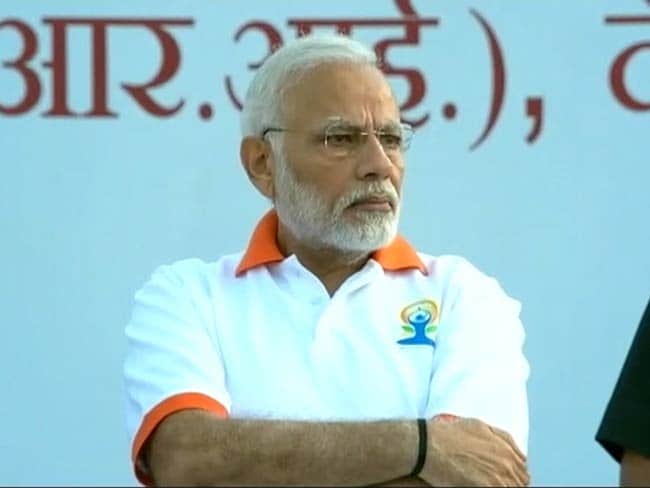 In a short while from now, PM @narendramodi will be joining the Yoga Day programme at the FRI campus in Dehradun. pic.twitter.com/7nyw3Xg92l

Jun 21, 2018 06:27 (IST)
PM Modi wished yoga enthusiasts across the world saying yoga is one of the most precious gifts given by the ancient Indian sages to humankind. "Yoga is not just a set of exercises that keeps the body fit. It is a passport to health assurance, a key to fitness and wellness", he said. Adding that he was looking forward to the occasion, he also tweeted a picture of the venue from Dehradun.

Reached Dehradun a short while back. Looking forward to the Yoga Day programme tomorrow morning at the iconic FRI campus at 6:30 AM. Here is a picture from the venue. pic.twitter.com/IfU6J1CrrG