INS Tarkash is part of the Indian Navy's Western Fleet and is under the operational command of Flag Officer Commanding-in-Chief of the Western Naval Command based in Mumbai. 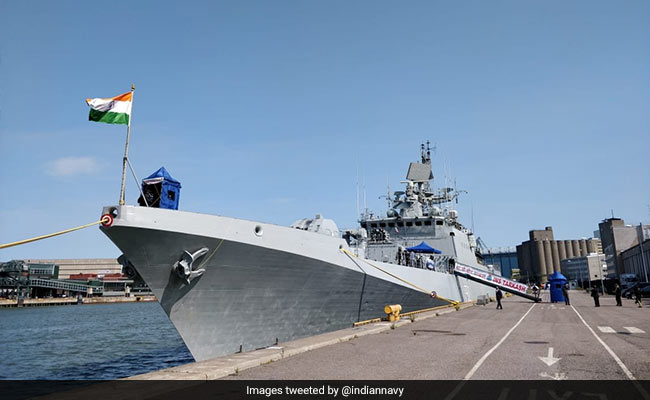 INS Tarkash, a state-of-the-art stealth frigate of the Indian Navy equipped with a versatile range of weapons, arrived in Spain on Monday for a three-day visit as part of Western Fleet Overseas Deployment, officials said.

The ship is part of the Indian Navy's Western Fleet and is under the operational command of Flag Officer Commanding-in-Chief of the Western Naval Command based in Mumbai.

"In continuation of the Indian Navy's overseas deployment to Africa, Europe and Russia, Indian Naval Ship Tarkash made a port call at Cadiz, Spain today for a three-day visit.

"The port call by INS Tarkash at Cadiz is a demonstration of India's warm ties with Spain and its commitment to enhance operational reach, maritime security and its solidarity with friendly nations. INS Tarkash had participated in a bilateral exercise Konkan-19 with Royal Navy ship HMS Defender prior entering Cadiz harbour," the Navy said in a statement.

INS Tarkash, commanded by Captain Sathish Vasudev, is a state-of-the-art warship of the Indian Navy equipped with a versatile range of weapons and sensors capable of addressing threats in all the three dimensions.

"During the port call, various dignitaries and government officials of Spain are scheduled to visit the ship. The ship will also engage extensively with the Spanish Navy during its stay in the harbour.

"Apart from professional interactions, a number of sports and social engagements are planned, which would go a long way in enhancing cooperation and understanding between the two navies," the Navy said.

Spain and India have traditionally enjoyed warm and friendly relations. A number of bilateral arrangements for defence cooperation and cultural exchange exist between the two countries, it said.

"The professional and cultural bonds developed through regular visits and interactions strengthens the established mechanisms of maritime cooperation between Indian Navy and Spanish Navy while pursuing common goals of keeping the seas safe and secure," the statement said.

The Indian Navy ships are regularly deployed as part of Navy's mission of "building bridges of friendship" and strengthening international ties. The ship visit to Spain comes amid growing importance and convergence of national goals towards shared maritime interest and deepening of ties between both the countries, it said.