As Captain Virani spoke, his wife Zahra recorded her excitement on a camera phone, and later shared the video with a long post on Instagram, thanking her husband for it. 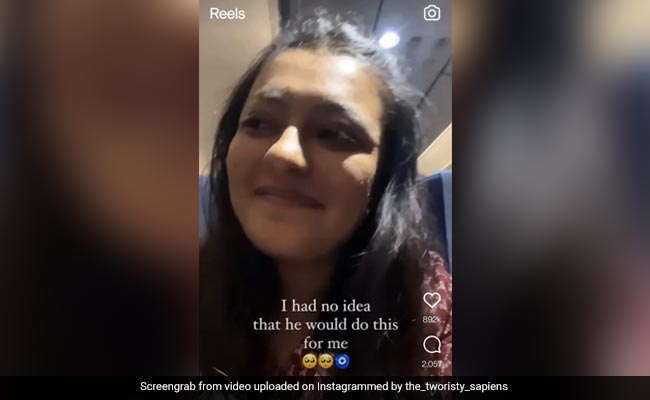 The video showed Zahra waving to Captain Virani from the tarmac.

An IndiGo pilot is drawing a lot of praise on social media for showering his wife with love and affection aboard his flight. Captain Alneez Virani used the plane's public announcement system to say that he has the “privilege of flying my wife to Mumbai”.

As Captain Virani spoke, his wife Zahra recorded her excitement on a camera phone, and later shared the video with a long post on Instagram, thanking her husband for it.

“Forever grateful for all that god has blessed me with, especially my husband. Still smiling ear to ear,” Zahra wrote.

The video showed Zahra waving to Captain Virani from the tarmac and the pilot acknowledging it through the cockpit window. It then showed Zahra taking her seat on the flight and unsuspectingly her husband began speaking to the passengers through the PA system.

“Some days you get a special flight, and today is one such flight. I have a special passenger with us on this flight. I have the privilege of flying my wife to Mumbai,” Captain Virani said.

“It's just a small thing for everybody, but means a lot to me. I just wish to share the happiness with all of you on board,” he added.

“My heart is so full and I do not know what I did so right in my life to deserve this man. I will say it again, it's my greatest blessing being your wife, Alneez,” Zahra wrote.

She added, “I have been on flights with Alneez being the pilot in command and it's always so special, but man, nothing even comes close to this one. It will forever be etched in my heart and make me smile ear to ear.”

Just before finishing her post, she adds, “You show the world how it's done and that an SRK romance can happen in real life too.”

The video has got more than 9.3 million views so far and over 8 lakh likes. Several people commented on it to express their joy and happiness and also congratulate the couple. Some of them said Zahra was one of the luckiest girls to have a husband like Captain Virani.

“So lucky you are,” commented another.

“You are a blessed wife and he has built these lovely memories for you both to cherish with your grandkids. Almighty bless you both with lots of love and affection for each other,” wrote another user.

What do you think of Captain Virani's gesture?