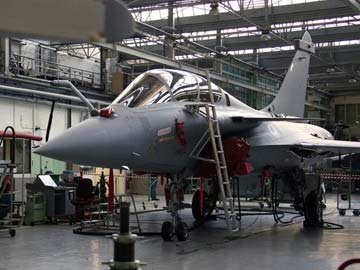 A Rafale jet fighter is seen on the assembly line in the factory of French aircraft manufacturer Dassault Aviation in Merignac near Bordeaux, southwestern France, on January 10

French aerospace major Dassault Aviation had won the contract to supply the fighter jets to the IAF in 2012.

The Air Force, which ideally requires 44 squadrons but can manage with 39, currently only has 32 squadrons; 12 of them of the near-obsolete MiG-21s.

Mr Jaitley had only one query: what is the cost of the contract?

The enthused IAF brass now says that if the government gives the final clearance, the massive, and in many ways the first-of-its-kind contract, may be clinched in the next six months.

Three sub-sets of the complicated deal have been completed, say sources. The committees that were in charge of Offsets, Maintenance, Transfer of Technology have concluded their work; it took them over two years to prepare documents running into thousands of pages. These include details of work share between Dassault and India's Hindustan Aeronautics Ltd or HAL, liabilities and costs to maintain and run the 126 jets. (A big step in India's Rafale jet deal with France)

Over 41 articles in the defence procurement procedure or DPP have been taken on board while arriving at the final documentation. HAL has been designated the lead domestic production agency. 18 of the 126 jets will be produced in France and the remaining 108 will be manufactured at the production unit in India. (Depleted fighter fleet is worrisome, says Air Chief)

But the committee responsible for costs and contract is yet to finalise its report. Once the deal officially receives clearance, this part of the contract may be ready for signing in less than two months, say sources. (France sees first Rafale jet deliveries to India by 2016)

Meanwhile, many of Rafale's competitors are lobbying hard against the contract and running down the fighter aircraft over various counts, including 'prohibitive' costs.

But the IAF top brass is clear that the process to buy the MMRCA is irreversible, notwithstanding a view that the IAF must induct the HAL-made Light Combat Aircraft (LCA) Tejas instead of buying the expensive Rafale.

IAF officials point out that the Tejas is yet to receive final operational clearance despite the home-grown fighter aircraft being in the making for over 30 years. As per revised timelines, the first full Tejas squadron in the Initial Operational Clearance configuration will be in place only by 2016-2017.

"We have been hand-holding the LCA for a long time and will continue to support it. But it is not a replacement for a medium, multirole fighter aircraft. Its reach is barely 200 km while we need an aircraft with a reach of at least 1000-km if we have to pose any challenge in the Tibet Autonomous Region, where India expects a major threat to its air combat power in case of a conflict with China," said a top IAF officer.

Promoted
Listen to the latest songs, only on JioSaavn.com
Meanwhile, the Rafale deal is likely to be on top of the agenda during French Foreign Minister Laurent Fabius's two-day visit to India, which starts today.

The question now is whether prime minister Narendra Modi and defence minister Arun Jaitley will also treat the deal as a matter of top priority.