India's Next Weapon Against Climate Change? This Dwarf Cow 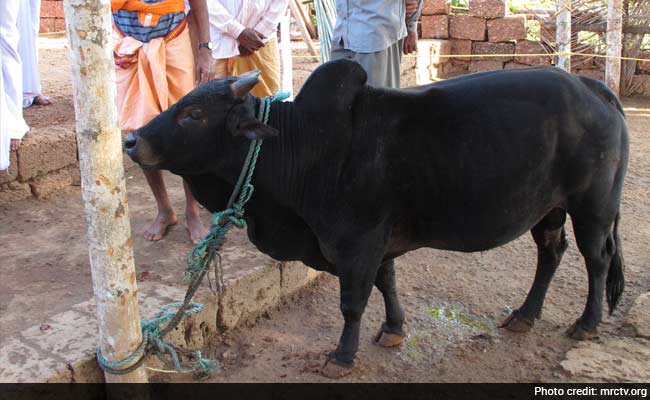 The two dwarf cow varieties can tolerate a higher degree of heat.

Worsening heat, fodder shortages and the threat of drought are forcing many hard-hit dairy farmers in the Anantapur area of southern Kerala to reduce their herds, experts say.

"This is the first time that due to lack of water and fodder, farmers are eagerly competing to sell off their livestock for throwaway prices," said Ananthakrishnan Kannappan, a livestock agent for 30 years in Anantapur.

But the solution to the problem is simple and small, livestock experts argue: heat-tolerant dwarf cows.

A team of researchers from Kerala Veterinary and Animal Sciences University and the state government's Animal Husbandry Department are now promoting a switch to Vechur and Kasargod cattle, two local varieties known for being easy to raise, resistant to diseases and - most important - better at tolerating high temperatures than the more popular crossbred cattle.

"High-yielding crossbreed varieties of cattle can faint or even die during hot and humid summer days," said EM Muhammed, an expert on animal breeding and genetics at the university. "Our natural breeds can better withstand the effects of climate change."

Dwarf cows, on the other hand, appear to carry a "thermometer gene" that allows them to better tolerate high temperatures, researchers said.

Dwarf cows were already gaining popularity among some farmers because they consume less food and water than conventional cattle varieties, the experts said. Small-scale farmers need only one or two dwarf cows to meet the milk needs of their households, they said.

The breeds are also less susceptible to mastitis, a common udder infection.

Still, many commercial cattle farmers are sceptical about the benefits of downsizing to dwarves. Of the 2.3 million cattle in Kerala, only 6.5 percent are dwarf varieties, agricultural experts say.

One issue is cost. A dwarf cow costs almost the same as a larger crossbred - about 20,000 rupees. But a crossbreed cow, when it is healthy, produces much more milk than its dwarf counterpart, making crossbreeds a popular choice among farmers.

"I am concerned about the commercial aspects," said K. Ravindran, a farmer from Palakkad. "In order to produce 10 litres of milk, a farmer has to rear at least four Vechur cows instead of one crossbreed."

But Basha Balakrishnan, a farmer living in Calicut, says she can sell a litre of milk from the smaller animals for three times as much as the larger cows.

"Though dwarf milk is costlier, many people - especially the rich who live in flats in Calicut - are eager to purchase it because it is thought to be more nutritious than crossbred milk," she said.

With India facing growing heat and drought threats, other state governments have reached out to learn more about Kerala's dwarf cows as a way to help protect their own cattle and dairy industries.