The big push of marine exports to China were part of India's efforts to widen its export base to bridge huge trade deficit with the world's second largest economy, which last year climbed to USD 57 billion. 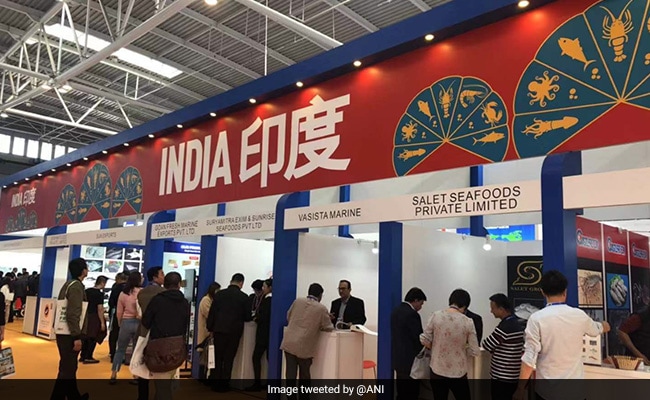 India's exports of marine products to China tripled in the last nine months touching USD 800 million and is expected to cross the USD one billion mark this year, according to an official statement.

The big push of marine exports to China were part of India's efforts to widen its export base to bridge huge trade deficit with the world's second largest economy, which last year climbed to USD 57 billion.

The Indian Embassy in Beijing along with Marine Products Export Development Authority (MPEDA) organised a promotional event and buyer seller meet on marine products on Wednesday on the sidelines of China Fisheries and Seafood expo in the eastern Chinese port city of Qingdao.

KS Srinivas, Chairman of MPEDA led a delegation of 40 plus Indian exporters and exporters associations for the event which witnessed "huge response" from Chinese importers with more than 50 participants from 25 major importing companies participating in the event, a press release issued by the Indian Embassy in Beijing said.

Last two years have witnessed a quantum jump in the exports of India's marine products to China.

In the first nine months of this year, India's exports of marine products to China has tripled and touched almost USD 800 million as per the data released by China's customs authority just two days back, the statement said.

"At this speed, we are bound to cross USD one billion mark in the year 2019," it said, adding that early this month a Chinese trade delegation visited India and signed a contract for the import of marine products worth USD 500 million in the next two years.

Mr Srinivas briefed about India's strength in this sector with the country emerging as the 4th largest exporter of seafood in the world.

India is the second largest aquaculture producer, 3rd largest fish producer in the world with exports of marine products worth USD 7 billion.

China is a major importer of marine products with imports of around USD 12 billion, he said.

He also elaborated about the massive efforts put in by India in ensuring the quality of the products thereby earning a great reputation in the international market, the statement added.

Prashant Lokhande, Economic and Commercial Counsellor of the Indian Embassy, said: "The bilateral relationship between India and China has emerged as one of the most vibrant and mature relationships during the last few years".

He referred to the two informal summits between the Prime Minister Narendra Modi and President Xi Jinping, in Wuhan in 2018 and the recent one in Mamallapuram.

"The summits laid a solid foundation for growth in our commercial and economic engagements. Our bilateral trade is touching USD 100 billion mark," he said.

"However, India has strong concerns on huge trade deficit with China and I am happy that the product which you all are handling has the potential to reduce the trade deficit by USD two billion if explored in a mission mode," he said.

"I am confident that today's event will be a major milestone in India-China commercial relations and pave its way of achieving USD two exports of Indian marine products to China in the near future," Mr Lokhande said.

China's importers may also like to pursue with GACC (General Administration of Customs China) for early registration of Indian species, he said.

He also said Indian Embassy has streamlined the process of granting business visas to Chinese businesses going to India.

"We are now providing one-year multiple entry business visas to Chinese businesses and that too online with no need to visit the embassy. One just needs to apply online and receive the visa online, take a print and go to the airport. No hassles at all," he said.

Highlighting the difficulties faced by Indians in getting visas to visit China, he said: "Of course, my friends from India present here would tell how difficult it is to get Chinese visa for our businesses. We are working with Chinese government to streamline its visa".