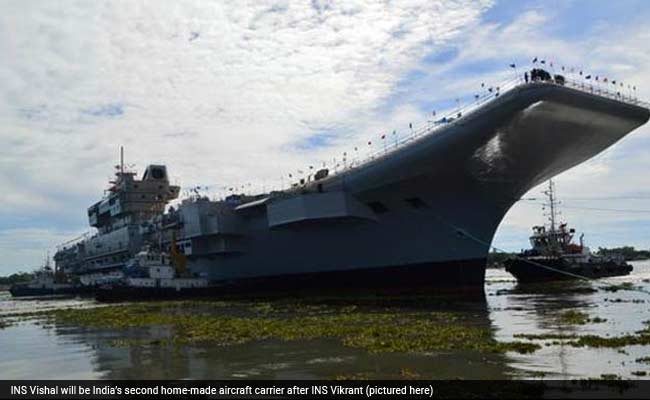 New Delhi: India's biggest ever warship, the INS Vishal, is likely to be propelled by nuclear energy.

The second of India's home-made aircraft carriers will be a whopper at 65,000 tonnes with enough room to accommodate 50 aircraft.

The Ministry of Defence has written to nine Indian shipyards, including some that are privately owned, in search of a partnership for the project.

The INS Vikramaditya, an old Russian carrier which weighs 45,000 tonnes, joined the Navy in 2013 and carries 34 aircraft on board. While the type of fighter jets which will be based on the new carrier is yet to be decided, senior officials indicated that the size of the warship indicates its fighters would be twin-engine.

"The cost of INS Vishal will depend on the kind of propulsion; nuclear propulsion will cost more than conventional means - diesel or gas," a senior naval officer told NDTV. A nuclear aircraft carrier costs upto three times more than a conventional one.

After years of neglect, India's navy is in the midst of accelerated modernisation under Prime Minister Narendra Modi. The government has fast-tracked processes to ensure the domestically-built INS Vikrant will be ready for service in 2018.

The INS Vishal could be built with US technology - the proposal was discussed during President Obama's visit to Delhi in January.

India is eyeing the Electromagnetic Aircraft Launch System (EMALS) developed in the US, which means jets can launch off a flat deck at a faster rate and with less fatigue to aircraft.

India's existing carrier force uses ski-jump ramps to help planes take off and uses wires to slow them down when landing. For that reason, planes have to be lighter and fewer in number (the upper limit is 34 currently).

With an EMALS system on a flat deck, the INS Vishal could field 50 heavier fighter jets with longer range as well as airborne early warning aircraft.