India's Air Pollution Down 20%, Report Pins It On Economic Slowdown

PM2.5 is highly toxic particulate matter that's a fraction of the diameter of human hair

A global ranking of cities and countries based on air pollution levels in 2019 is out and, on the face of it, there is good news for India. But on reading the fine print there's little reason to cheer.

But the 2019 World Air Quality Report says that on an average, cities in India exceed the World Health Organisation (WHO) target for annual PM2.5 exposure by a staggering 500 per cent.

PM2.5 is highly toxic particulate matter which is 2.5 microns wide, or a fraction of the diametre of human hair; being microscopic, it beats the body's defence mechanism and makes its way into various organs can cause diseases like lung cancer, strokes, heart diseases, among others. Air pollution is the main cause of death for children under the age of 15, killing six lakh every year, the report says.

In the latest rankings, India still remains in the top five nations with the worst air pollution, although its rank is down two notches from third to fifth position. 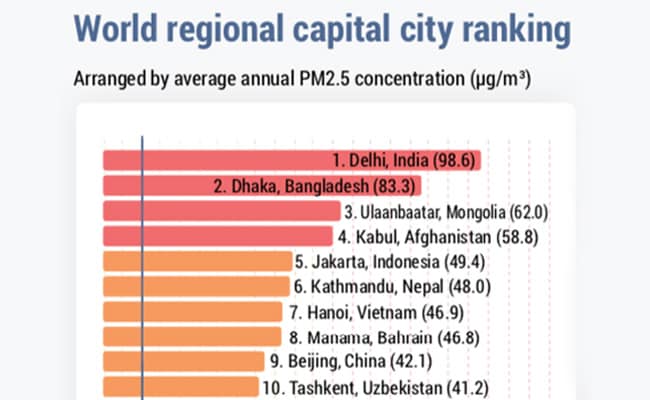 Delhi remains the most polluted capital of the world and it shot up in the ranking to 5, up six places

So what explains this 20 per cent fall? The IQAir AirVisual platform, which has produced this report based on government, non-government and private monitors across the world, says these improvements are largely a result of economic slowdown. The finding was arrived at by comparing India's economic growth with air pollution data, where there "appears to be" a correlation between lower growth and lesser pollution.

While more conclusive studies may be needed, this fall in air pollution linked to a fall in economic activity is perhaps not surprising. Scientists have recently reported a fall in air pollutants due to the coronavirus scare. In India, the Central Electricity Authority has reportedly estimated around 20 per cent lower growth in demand.

Apart from the dip attributed to the economic slowdown, air pollution levels remain a major concern - while the dip is in the overall, annual average, the spread and intensity of pollution is a grim reality. Overall, in the air pollution rankings, 21 of the top 30 cities are in India, compared to 22 in 2018.

Delhi remains the most polluted capital of the world and it shot up in the ranking to 5, up six places. Its PM2.5 level is 98.6 micrograms per cubic metre, almost 10 times the WHO's safe limit.

There is also a change in the world's most polluted city. For two years the dubious honour went to Gurugram. This year it's Ghaziabad, the western Uttar Pradesh city bordering Delhi. Its annual level of PM2.5 is 110 microgram per cubic metre, 11 times the safe limit.

What the data underscores is that the entire Indo-Gangetic Plain (IGP), home to over 400 million people, from Punjab to Bihar and West Bengal, has the worst levels of air pollution in the world.

What is a greater worry is that if the three monsoon months - July, August and September - are removed, the exposure to the deadly PM2.5 pollutant rises across the IGP.

Health experts have shown even short-term exposure has significant impacts, as this report says that with every 10 micrograms per cubic metre increase in PM2.5, there is a 1-4 per cent increased risk of cardiac arrest.

A year ago the government launched the National Clean Air Programme, the first step for a unified approach to clean India's air. While it aims to cut air pollution by up to 30 per cent by 2024, it's clear from the last few months that saw the longest spell of hazardous air in Delhi that the air pollution crisis has not improved much.

The cleanest city in South Asia is Satna in Madhya Pradesh. The average level of PM2.5 pollutant was just 15.5, just 5.5 micrograms per cubic metre more than the safe level.

India Added To UK Covid 'Red List': What It Means