"India In All Its Magnificence": Niagara Falls In National Flag Colours

The Niagara Falls was illuminated in the tricolours at the flag-hoisting ceremony which was officiated by India's Consul General in Toronto, Apoorva Srivastava. 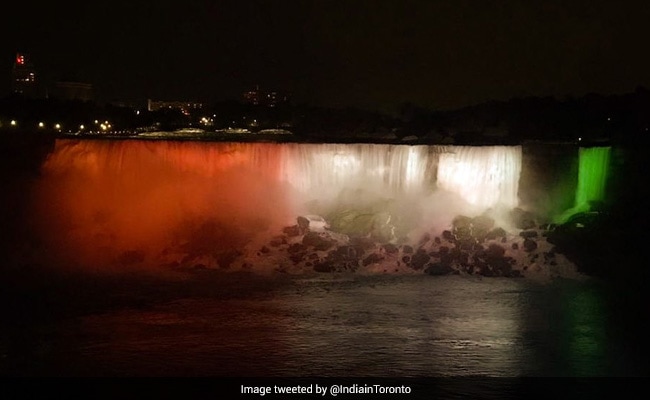 The Niagara Falls was illuminated in the tricolours at the evening ceremony.

The Indian tricolour illuminated the iconic Canadian landmark of Niagara Falls to mark India's 74th Independence Day. "India in all its magnificence at the Niagara Falls," tweeted the officials handle of Consulate General of India, Toronto, as it shared video of the globally-famous scenic spot lit up for the occasion.

The Niagara Falls was illuminated in the tricolours at the flag-hoisting ceremony which was officiated by India's Consul General in Toronto, Apoorva Srivastava.

And the tri-colour illuminates one of the world's most iconic destinations. India in all its magnificence at the Niagara Falls. #AatmaNirbharBharat@IndoCanadaArts@_apoorvasri@HCI_Ottawa@DrSJaishankar@PMOIndia@ICCR_Delhi@nadirypatel@IndianDiplomacy@incredibleindiapic.twitter.com/vG7JJo7Fqs

The special illumination was conducted with help from Niagara Falls Illumination Board, according to the Indo-Canada Arts Council, which organised the event.

India's 74th Independence Day was celebrated with much enthusiasm across Canada despite the restrictions due to the Covid-19 pandemic.

Car rallies were also held in multiple cities by members of the Indo-Canadian community to celebrate the occasion. The ''Tiranga Car Rally'' consisted of more than 200 cars decorated with both Indian and Canadian flags.

Pictures and videos shared by the Consulate General of India in Vancouver showed people waving the Indian and Canadian flags and raising patriotic slogans.

CG @_apoorvasri flagged off a car rally organized by My Indians in Canada to commemorate India's 74th Independence Day in #Brampton. #AatmaNirbharBharat@HCI_Ottawa@cgivancouver@Ajaybis@IndianDiplomacypic.twitter.com/eK6Ir2QgAT

"The ties between India and Canada, and the people who call them home, run deep," Canadian Prime Minister Justin Trudeau said as he extended Independence Day greetings to  Indo-Canadian communities in the country.

"Over 1 million Canadians of Indian heritage have made - and continue to make - many important contributions to our country," he said in a statement.