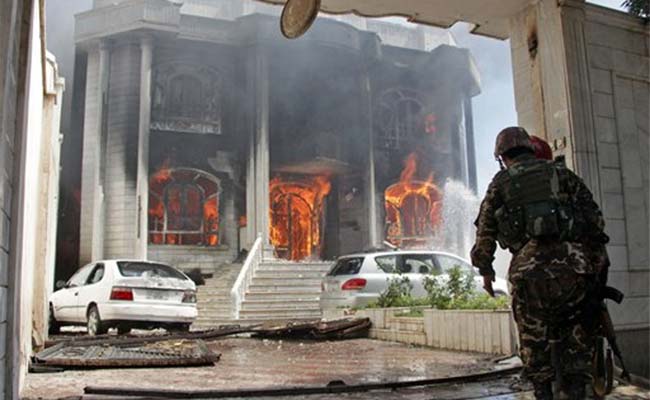 New Delhi: The Indian consulate in the Afghan city of Herat was attacked early Friday by four gunmen who tried to enter the complex and later fired from neighbouring buildings. All four were killed in an operation that lasted almost 10 hours.

The assault began at 3.35 am, when the gunmen reportedly opened fire on the consulate from a nearby house with machine guns and rocket-propelled grenades. One of them was shot dead while he was trying to scale the wall of the consulate.

Two other attackers were reportedly surrounded by over 150 security personnel, including soldiers of the Indo-Tibetan Border Police (ITBP), and shot. Nearly 10 hours later, the fourth man was also shot.

Afghanistan President Hamid Karzai called Indian Prime Minister-elect Narendra Modi, who thanked him for the work of the Afghan forces in rebutting the attackers. Mr Modi had earlier spoken to the Indian ambassador in Afghanistan and assured all help.

"I condemn the attack on our consulate in Herat, Afghanistan," Mr Modi tweeted. (Narendra Modi Speaks to Indian Ambassador to Afghanistan After Consulate Attack)

Pakistan has condemned the attack, which comes on a day Islamabad is expected to inform India whether Prime Minister Nawaz Sharif will come for Mr Modi's swearing in as Prime Minister on Monday. (Nawaz Sharif at Modi's Swearing In? Pakistan's RSVP Today)

Afghan president Hamid Karzai has confirmed that he will attend the oath ceremony. (Read more...)

Herat, which lies near Afghanistan's border with Iran, is considered one of the safest cities in the country. (Also read: PM Manmohan Singh condemns attack on Herat consulate)