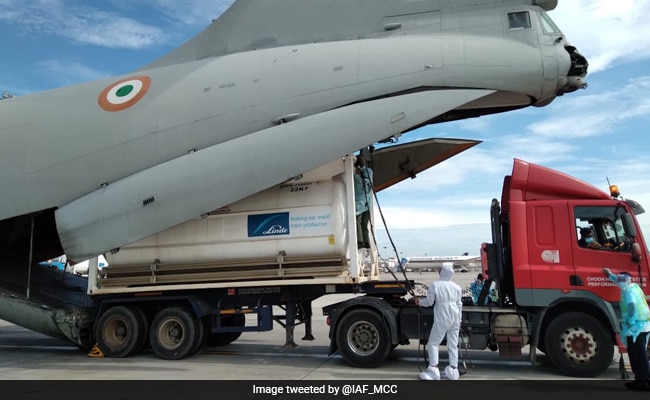 Heavy duty transport aircraft of the Indian Air Force (IAF) C-17 Globemaster airlifted cryo-containers from Bangkok on Thursday as part of a coordinated operation of the home ministry to tackle the oxygen scarcity in hospitals across the country during the second wave of the COVID-19 pandemic, officials said.

The country is trying to procure as many cryo-containers as possible from across the globe to reduce bottlenecks in the transportation of oxygen to the states.

The heavy lift fleet was joined by C-130 & An-32 ac for airlift of medical personnel, ventilators & oxygen concentrators within India pic.twitter.com/KjzEnS7TVF

The Ministry of Home Affairs (MHA) is coordinating the procurement and transportation of cryogenic and other types of cylinders from various countries using the IAF transport aircraft to meet the demand.

"An IAF C17 Globemaster arrived in Bangkok today to lift cryo-containers. Continuous IAF sorties are being co-ordinated by MHA to improve transportation of oxygen across the country during the 2nd Covid-19 wave," it said in a tweet.

The oxygen situation in the national capital is likely to improve after the Centre supplied 730 metric tonnes of the life-saving gas to Delhi.
The action came after stern observations made by the Supreme Court and the Delhi High Court on Wednesday.

If 700 MT of daily oxygen supply is ensured by the Centre, the Delhi government can set up around 9,000-9,500 more oxygenated beds, he said.

Mr Kejriwal said Delhi received 730 MT of oxygen on Wednesday and the city would require a daily supply of 700 MT till the second coronavirus wave lasts.

The country has reported more than 2.03 lakh deaths due to COVID-19 so far with 2.10 crore people affected by the viral disease.

The country saw a single-day rise of over 4.12 lakh COVID cases and 3,980 deaths on Thursday with the UNICEF calling it a tragic situation.