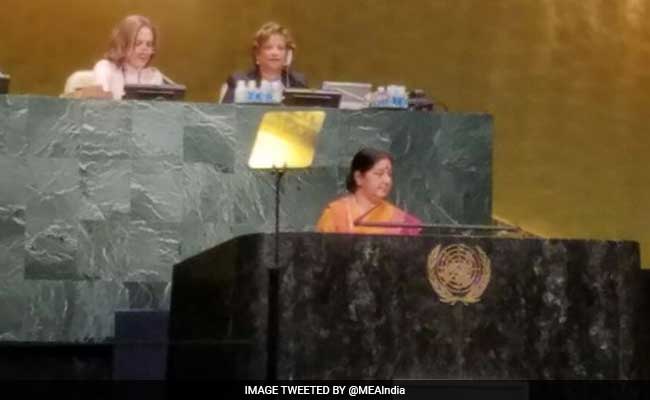 "We have decided to submit our Instrument of Ratification of the Paris Agreement on October 2, the birth anniversary of Mahatma Gandhi who epitomised a lifestyle with the smallest carbon footprint," Ms Swaraj said to a thunderous applause.

Though India had played a key role at last year's Paris climate summit, officials had indicated last year that India might not be able to stick to the COP21 timeline for emission reduction.

"The massive investments required entail a predictable and stable environment towards which we are working actively," she said. "Apart from this, our path-breaking initiative for an International Solar Alliance is intended to make efficient solar technology available for all."

Promoted
Listen to the latest songs, only on JioSaavn.com
While more than 90 countries committed to cutting down emissions and switching to clean energy at the Paris climate change summit last year, the deal can take effect only when a minimum 55 countries ratify it.  The promise by US, China and India - along with 31 other nations -- to ratify the pact this year has taken the number to 61, five above the threshold limit.

Reminding the UN that it was PM Modi who had suggested the principle of "climate justice", Ms Swaraj said India will continue to play a "leading role" in combating climate change.