A joint statement issued after the talks said the ministers applauded the exemplary cooperation between India and the US in confronting challenges emerging from the COVID-19 pandemic. 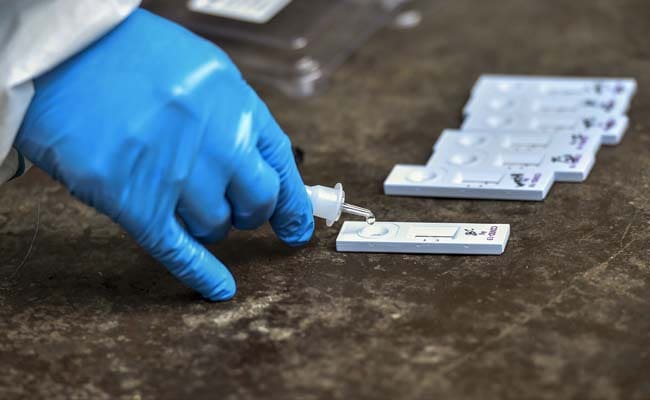 India and the US vowed to deepen collaboration in combating COVID-19.

India and the US on Tuesday vowed to deepen collaboration in combating COVID-19 by strengthening cooperation in the development of vaccines, diagnostics, ventilators and other essential medical equipment.

At the third edition of the 2+2 talks held between External Affairs Minister S Jaishankar and Defence Minister Rajnath Singh, and US Secretary of State Mike Pompeo and Defence Secretary Mark T Esper, the ministers sought to jointly promote access to high quality, safe, effective and affordable COVID-19 vaccines and treatments on a global scale.

A joint statement issued after the talks said the ministers applauded the exemplary cooperation between India and the US in confronting challenges emerging from the COVID-19 pandemic.

"They reiterated their resolve to strengthen cooperation in the development of vaccines, therapeutics, diagnostics, ventilators and other essential medical equipment," the statement said.

Recognising that bilateral engagement in research and development, and mass production of vaccines and therapeutics plays to the two countries'' respective strengths, the ministers sought to jointly promote access to high quality, safe, effective and affordable COVID-19 vaccines and treatments on a global scale, it said.

During the talks, India expressed appreciation for the 200 ventilators provided by the United States Agency for International Development (USAID) to the Indian Red Cross Society, while the US side hailed India's export of Personal Protective Equipment (PPE), essential medicines, and therapeutics to America during these challenging times, the statement said.

Speaking to the media, Pompeo said the joint efforts to fight the pandemic were discussed at great length during the talks.
US health agencies are working closely with the government and partners of India in the COVID-19 response, he said.

Indian companies are also cooperating with Gilead to manufacture Remdesivir for use by lower and middle-income countries all around the world, Pompeo said.

Several US and Indian companies are working to test and manufacture potential vaccine candidates, he said.

The joint statement said that the ministers looked forward to the conclusion of an overarching MoU between India's Ministry of Health and Family Welfare and the US Department of Health and Human Services (HHS), including their component agencies and departments, to enhance health cooperation, including on health emergencies and pandemics, prevention, diagnosis and treatment of communicable and non-communicable diseases, and biomedical research and innovation.

The foreign and defence ministers of the two countries also looked forward to the signing of the Memorandum of Understanding (MoU) between the Indian Council of Medical Research (ICMR) and the US National Institute of Allergy and Infectious Diseases (NIAD/NIH) to collaborate through an International Center of Excellence in Research focused on infectious diseases including COVID-19 and other emerging threats.

They also welcomed the upcoming call for applications for clinical research fellowships for early and mid-career Indian and American scientists to help expand the cohort of physician-scientists focused on research that will advance clinical practice and benefit public health in both countries, the statement said.

Noting the importance of cooperation in the health sector, the ministers also looked forward to the convening of the India-US Health Dialogue at an early date.

During the talks, they reaffirmed efforts to enhance supply chain resilience and to seek alternatives to the current paradigm, which had come under severe strain during the pandemic and exposed critical vulnerabilities.

The ministers sought to support the global economic recovery, including in India and the United States, to emerge from the pandemic more resilient than ever, the statement said.

The foreign and defence ministers also hailed repatriation of stranded Indian and US nationals from both countries during the pandemic, it said.

Underscoring the importance of ties between the respective legislatures, the ministers welcomed the launch of an India-US Parliamentary Exchange, the statement said.

Applauding the entrepreneurial spirit of Indians and Indian-Americans that has mutually benefited both nations, the ministers recognised the important role of people-to-people linkages in strengthening the overall bilateral relationship and economic ties, it said.

The statement said both sides look forward to the next iteration of the India-US Consular Dialogue to further increase cooperation and discuss issues of mutual concern, including visas, and familial issues related to marriage, adoption and child custody.

At the talks, the ministers welcomed the increasing number of Indian students in the US and acknowledged the role of expanding educational ties and fostering entrepreneurship and scientific innovation.

In this context, the ministers welcomed India's National Education Policy (NEP) 2020 which would pave the way for enhanced collaboration between academic institutions of both countries, the statement said.

The ministers also hailed the valuable contribution of the Fulbright-Nehru Programme over the years in furthering the exchange of outstanding academics and professionals between both countries. They celebrated the 70th anniversary of the programme this year.

The two sides also welcomed the commencement of issuance of 12-month reciprocal temporary duty visas to officials from both governments as a step to facilitate the growing partnership, the statement said.