Four mixed teams, comprising troops from both the countries, played a number of friendly matches with true sportsmanship spirit, said the Indian Army. 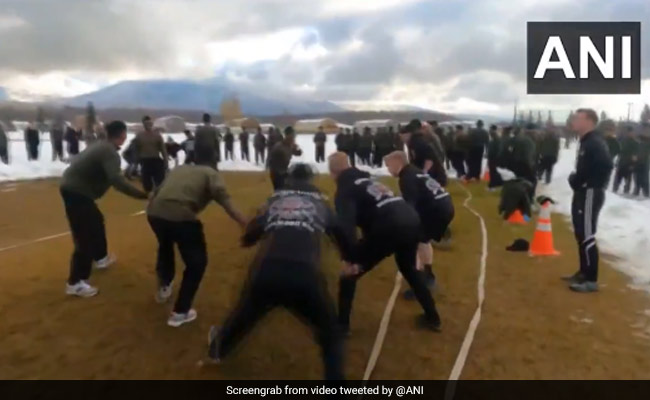 The games were played as part of of "ice-breaking activities" between Indian and American soldiers.

Four mixed teams, comprising troops from both the countries, played a number of friendly matches with true sportsmanship spirit, said the Indian Army.

Both contingents learned from each other's games. Whereas the Indian troops tried their hand at American Football, the US troops participated with equal zeal and vigour in Kabaddi.

These sports activities enabled the troops to know each other closely, which will be important in the coming activities such as firing, rappelling and the final validation exercise added Indian Army.

#WATCH | As part of 'Ice-breaking activities', Indian Army contingent and American contingent participated in friendly matches of Kabaddi, American Football and Volleyball at Joint Base Elmendorf Richardson, Anchorage, Alaska (US)

This comes amid the 17th Edition of India-US joint training exercise "Ex Yudh Abhyas 21" that commenced at Joint Base Elmendorf Richardson, Alaska (US) on Friday. The 14 days exercise includes joint training for operations under the United Nations mandate, said the Indian Army.

According to the ministry, 300 US Army soldiers belonging to First Squadron (Airborne) of the 40th Cavalry Regiment and 350 soldiers of 7 Madras Infantry Battalion Group of Indian Army are participating in the exercise. The 14 days training schedule includes activities on joint training in a Counter Insurgency/Counter Terrorism environment under the United Nations mandate.