India, US Have An Opportunity To Move Forward Together, Says Mike Pompeo

US Secretary of State Mike Pompeo has called for co-operation between the two nations through a relationship of "true equals, not of domination". 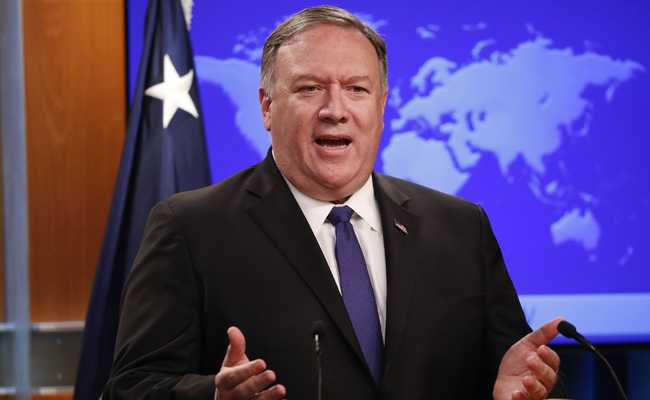 US Secretary of State Mike Pompeo praised Indian Prime Minister as a "new kind of leader for the world's most populous democracy", and quoted Narendra Modi's election slogan in Hindi, "Modi hai to mumkin hai" ("Modi makes it possible"), at a summit.

Mr Pompeo made the remarks during his keynote address to the India Ideas Summit of the US-India Business Council in Washington on Wednesday.

The Secretary of State is scheduled to visit New Delhi later this month. "I'm looking forward to exploring what's possible between our two peoples," he has said.

Preaching the gospel of free enterprise and free trade, Mr Pompeo has called for deepening co-operation between the two nations through a relationship of "true equals, not of domination" that recognises "unique strategic challenges".

He added, "We must embrace that strategic framework that works for both of our nations."

"Our two nations have an incredibly unique opportunity to move forward together, for the good of both of our peoples, the Indo-Pacific region, and indeed the entire world," he added.

Outlining President Donald Trump's economic agenda for India, Mr Pompeo said, "We also have to make sure that we have economic openness. We have to have a central theme being the idea that we have liberty and sovereignty in each of our two nations, and build on those ideas."

"These need to be places in which economic growth reinforces our democratic values, and not dictatorship. It needs to be a place where our partnership is one of true equals, not of domination," he further said.

"Based on my conversations in New Delhi last year, and in subsequent phone calls and meetings, I believe this is a deeply shared vision," he added.

Mr Pompeo also glossed over differences between the two countries, past and present, with his emphasis on equality and cooperation in the Indo-Pacific region where both nations share strategic concerns.

"I'm sure we'll broach some tough topics too," he said. "But as we democracies have come to know, that we work out our disagreements. We bring them to the table honestly and fairly. And we'll probably discuss the recent decision on the GSP programme."

The General Scheme of Preferences (GSP), which gave some Indian exports preferential treatment, was ended last month by Trump, who accused it of failing to provide "equitable and reasonable access" for the US to its markets.

It is one of many trade, tariff and defence issues where the two countries are at loggerheads and Mr Pompeo offered alternatives for India that would also benefit the US.

Last month, the US cancelled the exemption from sanctions it gave India for continuing to buy Iranian oil and Mr Pompeo suggested solutions: "On energy, we want to complete the Westinghouse civil nuclear project, and deliver more LNG (liquid natural gas) and crude.

"These steps will give Indians reliable, affordable, diversified energy independence so they will no longer have to rely on difficult regimes like those in Venezuela and in Iran."

In defence matters, India could face US sanctions for purchasing the S-400 Russian missile defence system.

Mr Pompeo did not mention the US alternative of Terminal High Altitude Area Defense (THAAD) anti-missile system or the top stealth jet fighter, the F-35, but said, "Lockheed Martin's F-21 and Boeing's F/A-18 are state-of-the-art fighters that could give India the capabilities it needs to become a full-fledged security provider throughout the Indo-Pacific."

He said that the NASA was working with the Indian Space Research Organization (ISRO) on "the world's most advanced earth-observation satellite" and India's second lunar mission and asked, "How cool is that?"

In the deeply-divided American politics, relations with India so far appear to have bipartisan support. Pointing to the presence of Kentucky's Republican Governor Matt Bevin and New Jersey's Democratic Governor Phil Murphy, he said, "We got a bipartisan agenda. It's fantastic".

Keeping up the bipartisan theme, he acknowledged the role of former Democratic Presidents Bill Clinton and Barack Obama in building relations with India.

"President Clinton's visit in 2000 set a real marker, he set the table for closer cooperation between the two countries," and "President Obama granted India 'Major Defense Partner' status, and supported India's quest for a permanent seat on the UN Security Council -- a position that the US continues to support."

"And under President Trump, we've taken our defence cooperation to new heights, solidified our common vision for the Indo-Pacific, and taken a far tougher stand on Pakistan's unacceptable support for terrorism in the region," Mr Pompeo said.

He also acknowledged the role of a Congress Party Prime Minister who ushered in economic liberalisation in 1991 that opened the way for closer ties with the US.

"Prime Minister (P.V. Narasimha) Rao said that at the time his government would, quote, 'sweep the cobwebs of the past and usher in change'," Mr Pompeo said.

At the same time, he couldn't resist taking a dig at Mr Rao's predecessors, Jawharlal Nehru and Indira Gandhi, or Trump's predecessor, Barack Obama, whom he diplomatically did not name, "We couldn't trade much because India had a closed economy. The License Raj kept businesses and innovators out of the black and covered in red tape. Five-year plans became the received wisdom, something like our two percent growth here in the last administration became sort of a new normal."

Without being critical, he mentioned that in period after gaining freedom, India "cherished independence through the non-aligned movement".

"India's free-market reforms unleashed the innovation, the entrepreneurship, the sheer drive of its own people to do remarkable things."

That led to a seven per cent growth in India from 1997 to 2017, year-on-year lifting millions of Indians have been lifted out of poverty, while the country became a world leader in information technology, engineering and pharmaceuticals.

Meanwhile, the US-India bilateral trade reached $142 billion last year -- a seven-fold increase since 2001 -- with Washington accounting for 20 per cent of New Delhi's goods and services exports.

More than 500 American companies now successfully operate in India and the nation's prosperity "has helped propel Indians to every corner of the Earth", he said.

"Indian-Americans too have contributed mightily to things that happened in the US," Mr Pompeo said. "We've watched Indians reach the heights of industry, academia and government. People like Microsoft's CEO (Satya Nadella), and the FCC (Federal Communications Commission) chairman Ajit Pai, a great Kansan, have done remarkable things all around the world."

Mr Pompeo however, did not mention Google CEO Sundar Pichai, whose company Trump has accused of partisanship.

Before the session with Mr Pompeo, USIBC president Nisha Biswal had presented the organisation's Global Leadership award to Mr Pichai.