India and Afghanistan accuse Pakistan of providing safe haven to the Afghan Taliban, Haqqani network and other terrorist groups, which carry out attacks in the two countries. 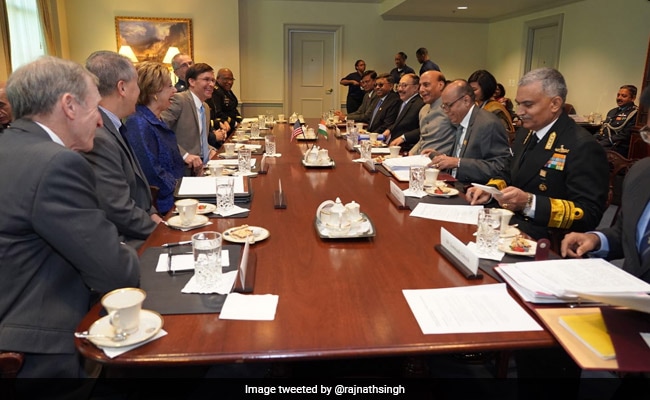 India and the US on Thursday asked Pakistan to take "immediate and irreversible action" to ensure that no territory under its control is used for terrorism against other countries and to prosecute the perpetrators of cross-border terror attacks, including Mumbai and Pathankot strikes.

The two countries also asked Pakistan to take concerted action against all terrorist networks, including al-Qaeda, ISIS, Lashkar-e-Taiba, Jaish-e-Mohammad, Haqqani Network, Hizb-ul Mujahideen, Tehreek-e-Taliban Pakistan and D-Company of underworld don Dawood Ibrahim, according to a Joint Statement issued after the 2+2 Dialogue between India and the US.

India and Afghanistan accuse Pakistan of providing safe haven to the Afghan Taliban, Haqqani network and other terrorist groups, which carry out attacks in the two countries.

The joint statement was issued at the end of the second India-US 2+2 dialogue between US Secretary of State Mike Pompeo, Defense Secretary Mark Esper and Foreign Minister S Jaishankar and Defence Minister Rajnath Singh at the State Department on Wednesday amid the historic impeachment vote against President Donald Trump.

The first 2+2 dialogue was held in New Delhi in September last year after the mechanism was approved by Prime Minister Narendra Modi and US President Trump.

"The Ministers called on Pakistan to take immediate, sustained and irreversible action to ensure that no territory under its control is used for terrorism against other countries in any manner, and to arrest and prosecute the perpetrators of cross-border terrorist attacks, including 26/11 Mumbai and Pathankot," the joint statement said.

India appreciated US support at the United Nations for terrorist designations, including of JeM leader Masood Azhar, and the US welcomed changes in Indian law that will facilitate further cooperation on terrorism designations, it said.

In one of the deadliest terror attacks in India's history, 166 people, including six Americans, were killed and over 300 injured when 10 heavily-armed Lashkar-e-Taiba (LeT) terrorists from Pakistan created mayhem in Mumbai on November 26, 2008.

Outlawed Jamaat-ud-Dawah (JuD) chief Hafiz Saeed, a UN-designated terrorist and founder of the LeT, was the mastermind of the Mumbai terror attack.

The US Department of the Treasury has designated Saeed as a Specially Designated Global Terrorist. The US has also offered a $ 10 million reward for information that brings Saeed to justice.

Pakistan has been reluctant to take any concrete action against Saeed. It has also faced strict scrutiny and serious warnings from FATF (Financial Action Task Force) for its lack of action to curb terror financing by pro-terror groups and individuals, the statement said.