India To Invest $50 Million To Boost Capacity Building In Palestine

Prime Minister Narendra Modi and Palestinian President Mahmoud Abbas in a meeting discussed the full range of India- Palestine ties following which the two sides signed six agreements worth around USD 50 million that includes setting up of a USD 30 million super speciality hospital in Beit Sahur. 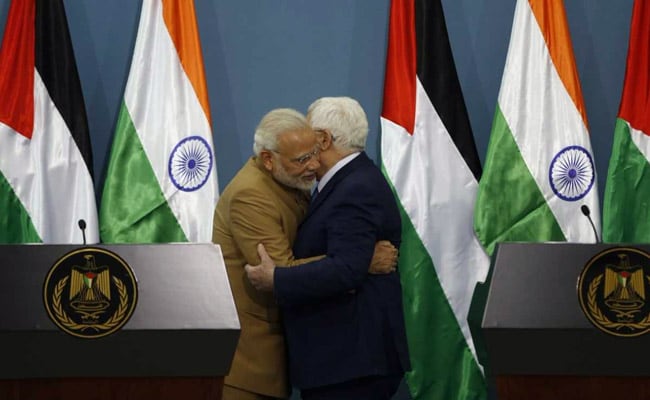 Ramallah: India today said it will set up an institute for diplomacy in Palestine and double the number of scholarships to Palestinians to study in India among several measures to help it in capacity building and infrastructure development with an investment of USD 50 million.

Prime Minister Narendra Modi and Palestinian President Mahmoud Abbas in a meeting discussed the full range of India- Palestine ties following which the two sides signed six agreements worth around USD 50 million that includes setting up of a USD 30 million super speciality hospital in Beit Sahur.

Three agreements in the education sector worth USD 5 million, one MoU for procurement of equipment and machinery for the National Printing Press and one for construction of a centre for empowering women were also signed.

"India has been an old friend of Palestine in its efforts towards nation building," PM Modi said in a media statement.

"We have cooperation in training, technology, infrastructure development, project assistance and budgetary support," he said.

"As part of our new initiative we have started to work on a new technology park, the development of which is in fast progress. I hope it will function as an institution that parts skills that create employment and also as a service centre," the prime Minister said.

India has in the past been training Palestinian diplomats but Modi announced that New Delhi would now also be cooperating in setting up an institute of diplomacy in Ramallah which he believes "will emerge as a world class centre for training of young diplomats".

Appreciating the determination shown by Palestinian youth in harsh conditions, PM Modi said the aspirations of young people in both the countries are the same and he wishes them an environment where there are "opportunities for progress, prosperity and self-dependence available".

"The Palestinian people have continuously demonstrated a strong will in the face of challenges and crisis. You have demonstrated rock solid determination to deal with adversity and that too despite an environment of instability and insecurity which withholds progress and puts to danger hard earned success," he noted.

Majdi Khaldi, a close aide to Abbas, expressed gratitude at the Indian assistance, saying New Delhi has continuously supported Palestinians with such efforts.

He told PTI that India has committed to an investment of about USD 45-50 million in these projects.

Promoted
Listen to the latest songs, only on JioSaavn.com
PM Modi also announced to enhance the number of scholarships being provided to Palestinians in the exchange programme from 50 to 100.

President Abbas had accorded a red carpet welcome to PM Modi, the first Indian Prime Minister to make an official visit to Palestine, in an official ceremony at the presidential compound, also known as Muqata'a, in Ramallah - the Palestinian seat of government.