Addressing the Parliament of Uganda, PM Modi said Gandhi in his life and beyond was one with Africa and that India's own freedom struggle is closely linked to Africa. 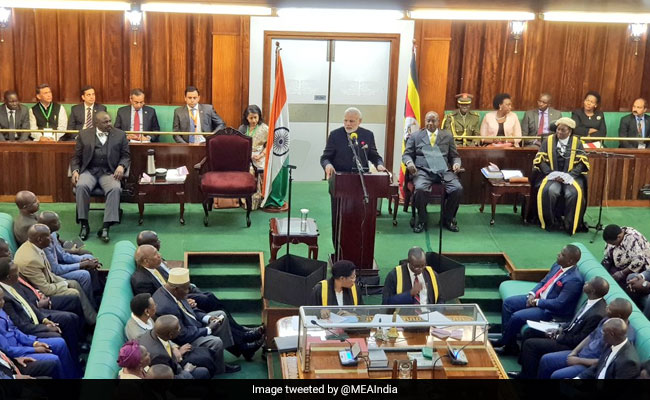 Some of the most profound changes in Africa came through Gandhian methods, says PM Modi in parliament

India will build a Gandhi Heritage Centre at a sacred site in Uganda where a portion of Mahatma Gandhi's ashes was immersed to pay homage to the towering leader's universal and timeless values of life, Prime Minister Narendra Modi announced today.

Addressing the Parliament of Uganda, PM Modi said Gandhi in his life and beyond was one with Africa and Africans and the story of India's own freedom struggle is closely linked to Africa.

"As we approach the 150th birth anniversary of Mahatma Gandhi, there can be no better homage than a Centre to remind us of Africa's role in shaping his mission that even inspired Africa to freedom and justice; and the universal and timeless values of his life and message," PM Modi said.

At the sacred site in Jinja, 85-kilometre from Kampala, where a statue of Gandhiji now stands, we will build a Gandhi Heritage Centre," he said.

Narendra Modi, the first Indian prime minister to address the Parliament of Uganda, said for India, Gandhi was more than just the 21 years that he spent in Africa, or the First Non-Cooperation Movement he led.

"For India, the moral principles of independence movement, or the peaceful means to pursue it, were not just confined to the boundaries of India or to the future of Indians. It was a universal quest for liberty, dignity, equality and opportunity for every human being. Nowhere did it apply more than in Africa," he said.

PM Modi said 20 years before India's independence, its leaders had linked India's freedom struggle to the fight against colonial rule around the world, especially Africa.

He said even as India stood on the threshold of independence, the fate of Africa was not far from its minds.

"We stood firm in opposition to apartheid in South Africa. We took leading and bold positions in former Rhodesia - which is now known as Zimbabwe, in Guinea Bassau, Angola and Namibia," he said.

"History is witness to the success of the ancient wisdom of India and Africa and the enduring strength of peaceful resistance. Some of the most profound changes in Africa came through Gandhian methods," PM Modi said.

India's principled support to Africa's liberation movements often came at a cost to our nation's trade. But, nothing mattered in comparison to Africa's freedom," he said.

Prime Minister Modi arrived in Uganda on his two-day visit last evening and left for South Africa today for the final leg of his three-nation trip.