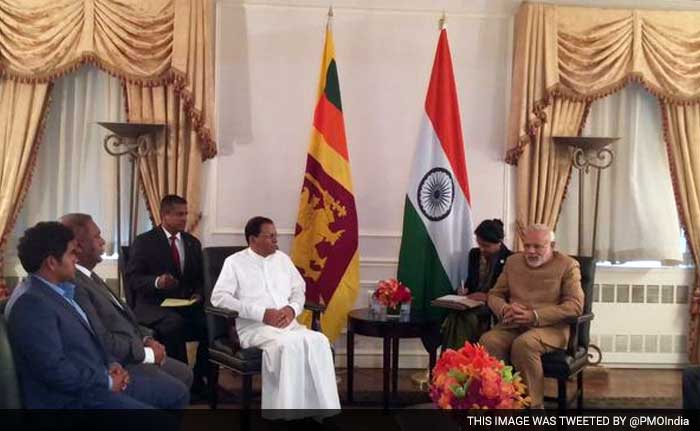 United Nations: Noting a "sea change" in the approach of the new Sri Lankan government over the issue of the alleged war crimes during the last phase of the civil war with the Liberation Tigers of Tamil Eelam or LTTE, India has said it supports the quest for justice while being respectful of the country's sovereignty.

The issue of human rights and the situation pertaining to the ongoing discussions on UN Human Rights Council came up during a meeting between Prime Minister Narendra Modi and Sri Lankan President Maithripala Sirisena on the sidelines of the UN General Assembly summit yesterday.

"As far as India is concerned, we naturally support the quest for justice. At the same time we are respectful of Sri Lanka's sovereignty. We are hopeful that a way will be found where both these points and objectives can be met," External Affairs Minister spokesman Vikas Swarup said after the meeting.

The Sri Lankan Government is "engaging" with the UN Human Rights Council and there is a "sea change" in the approach of the new government in this island nation, he said.

When asked about India's position on hybrid court, Mr Swarup said New Delhi would have to look at the final outcome of the draft resolution as he hoped that it would be a consensus and acceptable to the Sri Lankan Government.

"Our expectation at this point is that hopefully it will be a consensus resolution which everyone will be able to pass unanimously and it is something which will be acceptable to the Government of Sri Lanka also," he said.

UN High Commissioner for Human Rights Zeid Ra'ad Al Hussein has called for the formation of a hybrid special court, integrating international judges, prosecutors, lawyers and investigators. Sri Lanka has been insisting on a domestic mechanism to probe the matter.

Rights groups claim that the Sri Lankan military killed 40,000 civilians in the final months of the three decade-long brutal ethnic conflict with the LTTE that ended in 2009.

Complementing the Sri Lankan President on the two elections in the country, PM Modi said this revealed the deep rooted democratic traditions and the faith that the people of Sri Lanka had in the democracy.


There was a discussion on the reconciliation process and the President said he expected this to move forward, Mr Swarup said.

Issues of developmental project in Sri Lanka came up, he said, adding that India has made a number of new commitments on railway, infrastructure power and housing project.

"We expect 46,000 houses to be completed by early next year," Mr Swarup added.