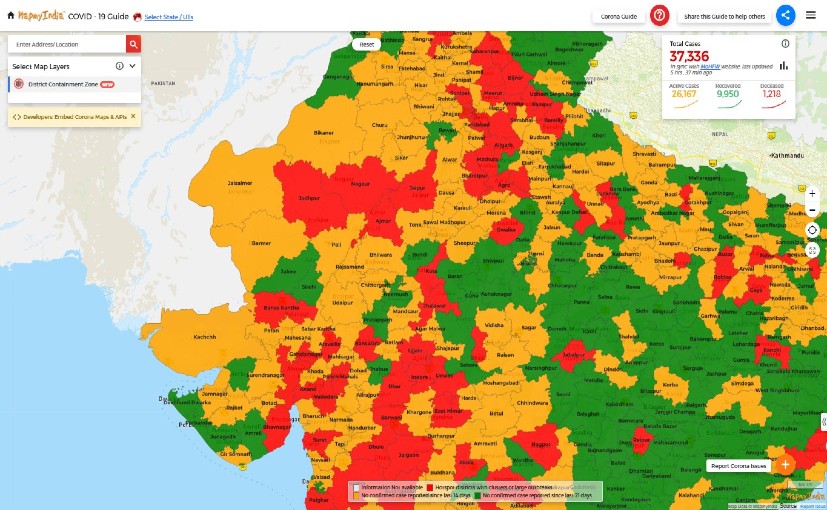 Restriction on revealing the attributes or features of sensitive areas will remain.

India today set free the process of map making and generation of geospatial data, giving Indian private players the freedom to handle such information without prior approval or restriction. Mapping was till now remained a government preserve, handled by the Central government's Survey of India. With the sweeping changes announced today, any Indian entity can take part in the process and profit from it.

The Department of Science and Technology's announcement is based on the principle that what is readily available globally need not be restricted in India.

In a series of tweets, Prime Minister Narendra Modi today said liberalising the acquisition and production of geospatial data was a massive step in "our vision for an Aatmanirbhar Bharat".

India's farmers will also be benefited by leveraging the potential of geo-spatial & remote sensing data. Democratizing data will enable the rise of new technologies & platforms that will drive efficiencies in agriculture and allied sectors. #mapmakingsimplified#Freedom2MapIndia

This could potentially lead to private players seeking maps and data that suit their specific purposes. For instance, local delivery of products and services requires highly specific details of a locality within a town. This, in turn, could lay the ground work for future smart city projects.

Union Minister for Science and Technology said today that the move will help drive efficiencies in agriculture and emergency-response capabilities while also facilitating rise of new-age industries. "PM Swamitva Yojana is a shining example of the use of geospatial data to empower our rural population," he said talking to media persons in New Delhi.

He said increased participation of private sector will augment the growth of new technologies, platforms and application of geospatial data contributing to the country's progress.

"Geospatial data is foundational and vital to all manner of planning, governance, services, infrastructure, and applications," said Ashutosh Sharma, Secretary To the Department of Science and Technology. Speaking in New Delhi today, he said the ease of collecting data, using it, and sharing it was a key concern of the government as it took the decision to free the process. He also said that deregulation, i.e., not requiring prior approval for survey, was another criterion.

"Government agencies and private sector must collaborate very strongly to avoid duplication and also to bring in speed and scale in the whole process of collecting and using data," he said.

The government has, however, put in place some guidelines for the new rules to function. For instance, there is restriction on revealing the attributes or features of sensitive areas even though there would be none on surveying the area itself.

"The guideline is not for access, but only for surveying," Mr Sharma said.

Similarly, Terrestrial mapping and surveying will be allowed only by Indian entities. The data generated from such processes can be owned only by Indians. Foreign players can licence the information but not own it.

"Our startups and mapping innovators will be trusted to self-certify, apply good judgement and be relied upon to demonstrate adherence to guidelines," a Press Information Bureau release said. "Emerging vibrant technologies like Digital India, Smart Cities, eCommerce, autonomous drones, delivery, logistics, and urban transport require a leap forward in mapping with greater depth, resolution and precision."