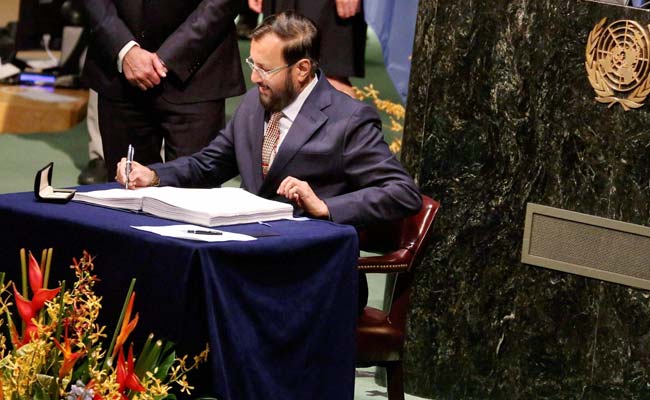 New York: India has sought time to implement the Paris climate agreement, saying it should not be done in "haste" and all countries should be allowed to follow their national processes.

"A debate about early entry into force of the Paris Agreement is unfortunate. Early ratification can be understood, but it will take time as per the national processes of approval," Environment Minister Prakash Javadekar said at the Major Economies Forum Meeting in New York yesterday.

"We should not make haste because Paris Agreement is to be implemented post 2020. There is enough time for ratification and all countries should be allowed to follow their national processes," he said.

According to reports, the US and China are leading a push to bring the Paris climate accord into force much faster aided by a typographical glitch in the text of the agreement.

India on April 22 signed the historic deal along with more than 170 nations, marking a significant step that has brought together developing and developed nations for beginning work on cutting down greenhouse gas emissions.

"Paris agreement is a historical achievement for mankind. All countries should implement it in letter and spirit. After signing of Paris agreement, developed world needs to immediately ratify the Kyoto Protocol second commitment period and should present enhanced pre-2020 actions," he said.

The minister also urged developed nations to announce their "enhanced" pre-2020 climate action plans and undertake the "urgent" task of mobilising $100 billion, lack of which will hamper implementation of nationally determined contributions of developing countries.

"The second urgent task to be done is Mobilisation of $100 billion. Without this crucial mobilisation, many of the developing countries cannot implement their nationally determined contributions," Mr Javadekar said.

He said the need of the hour is to lay out the complete institutional mechanism for building up on the Paris accord.

"The plan to work for the first meeting of Ad hoc group on Paris Agreement (APA) and additional works by Subsidiary Body for Implementation and Subsidiary Body for Scientific and Technological Advice (SBI/SBSTA)...should be prepared in consultation with all stake holders as issues covered under these bodes have a direct bearing on the Provisions of the Paris Agreement. There is a need for coherence between COP, APA, SBI, SBSTA and other institutions," he said.

Observing that India has led from the front as far as pre-2020 action is concerned, he said that though it is not mandated to take pre-2020 actions as per Kyoto Protocol, the government led by Prime Minister Narendra Modi has showcased to the world that if there is political will, there is a way.

"India has shown its leadership by action. It is now actions of developed countries which will be watched by the world against the backdrop of India's proactive achievements," he said.

"It should be comprehensive, covering all relevant sources, sinks and reservoirs of greenhouse gases, and adaptation as well as finance, technology development and transfer, including of cost effective technologies," he said.

Elaborating about India's actions, Mr Javadekar said that coal cess which has been increased from 70 cents per tonne in 2014 to $6 per tonne in 2016 is a "bold" action and if developed countries follow India, they can easily mobilise $100 billion per annum, which has remained "elusive" till now.

He termed the government's decision to tax polluting vehicles and incentivising electric and hybrid vehicles as a "major step in the right direction".

"World's largest program launched by India of 175 GW of renewable energy is on track. A new major initiative to expand metro network in next five years to 1,300 km from present 300 km is an ambitious initiative in providing clean public transport to more than 10 million commuters.

"LED bulb program has succeeded beyond any calculations and has already achieved 100 million target and in next four years it will achieve target of 700 million bulbs," he said.