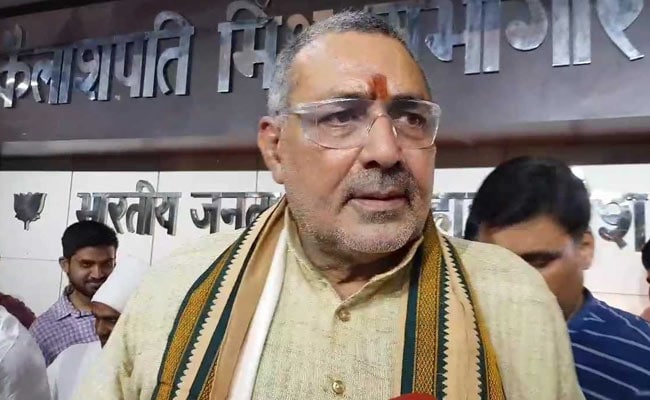 Hitting out at the Congress, Union Minister Giriraj Singh on Thursday said that rather than Pakistan, India is "more scared" of the people who speak Pakistan's language in parliament.

"India is not scared of Pakistan, whether it is PoK or border... India is more scared of people sitting here, who speak Pakistan's language in parliament for the sake of votes," Mr Singh was quoted as saying by news agency ANI.

On Wednesday, Pakistan Prime Minister Imran Khan chaired a meeting of the National Security Committee and discussed the situation arising out of the "unilateral illegal" actions by the Indian government in Jammu and Kashmir and along the Line of Control (LoC).

In the meeting, the Committee decided to downgrade all diplomatic relations with India and review all bilateral arrangements. The Pakistan government said in a tweet the matter would be taken to the United Nations, including the UN Security Council.

"Pakistan has been doing this since the beginning. I don't have any expectations from Imran Khan and his team. But it feels sad when Congress leaders speak Pakistan's language," said Giriraj Singh.

"Prime Minister Narendra Modi and Union Home Minister Amit Shah have abrogated Article 370 in nation's interest. Still our PoK is remaining... Kashmir has the natural potential to become Switzerland and the government will work towards taking it to that path. It will be visible in five-seven years," he added.

He also said that unlike Prime Minister Modi, Imran Khan "begs to shake hands with US President (Donald Trump)".

It also passed a resolution revoking Article 370, with Home Minister Amit Shah stating that history will decide if the decision to repeal the constitutional provision is right or wrong.