Giving his own example, Mr Nasheed said the Indian high commission gave him refuge when he was going to be arrested by Maldives's former president Abdulla Yameen. 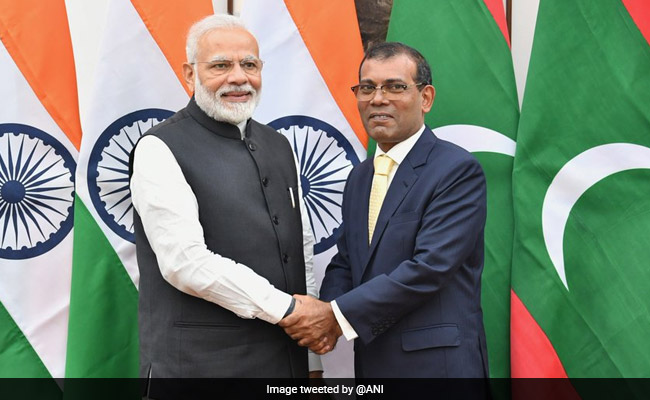 The amended Citizenship Act is an internal matter of India, Maldives Parliament Speaker Mohamed Nasheed said on Friday while noting that the country has always been a safe haven for persecuted minorities.

Giving his own example, Mr Nasheed said the Indian high commission gave him refuge at a time when he was going to be arrested by Maldives' former president Abdulla Yameen.

"Religious persecution is wrong and India will always give refuge to those persecuted. When President Yameen wanted to arrest me and when I went to Indian High Commission, they gave me a refuge. They were quite willing to bring me to India too. Secularity of India, respecting minorities are founding ideas of India," he said.

Mr Nasheed said the amended Citizenship Act is an internal matter of India.

"I have complete trust in Indian democracy and whatever comes out from the process would be what majority of people from India want. It is India's internal matter. India is one of the safe havens for persecuted minority communities," he said.

The Citizenship (Amendment) Bill was passed by Rajya Sabha on Wednesday, two days after the Lok Sabha passed it. President Ram Nath Kovind gave his assent to the Bill on Thursday, turning into an Act.

According to the Act, people from Hindu, Sikh, Buddhist, Jain, Parsi and Christian communities who have come to India till December 31, 2014 from Pakistan, Bangladesh and Afghanistan, owing to their religious persecution there, will not be treated as illegal immigrants and will be given Indian citizenship.

The Act says that non-Muslim refugees will be given Indian Citizenship after their stay in India for five years, instead of the earlier requirement of 11 years.

The Act also proposes to give immunity to such refugees facing cases as illegal immigrants.

The former president of Maldives, who is leading a parliamentary delegation to India, raised three key issues plaguing the island nation - the ISIS, debt trap of China and the climate crisis.

On the spread of ISIS and how to contain it, he said his country has a lot of programmes with India on security and safety.

"India has 200 million Muslims and not one person went from India to fight for the ISIS. So you must have done something correct to achieve that," he said.

He said the second issue is "debt-trap" by China.

"We also discussed in every single meeting the debt trap of China. I do not see Chinese investment as development assistance but as a debt trap as we are now unable to overcome the assistance," he said.

Mr Nasheed claimed that prices of most projects were intentionally inflated so that when business plans failed, it was impossible to pay back the money.

He said the Maldives has a "big bill to pay" which is challenging for the country but that they will pay it back. "It is sad and worrying that bigger countries especially China feel that they can use debt as a leverage," he said.

He said his personal view is that all the deals with China have to be restructured and that any further arrangements with Beijing would neither be in favour of the people of the Maldives nor in the interest of South Asia.

"Without firing a single shot, China has been able to grab more than the East India company has ever done. We must find a vision where South Asia does not go the same road as the 18th century," Mr Nasheed added.

The Maldives is among a number of countries where China has invested money for building highways and housing as part of its Belt and Road Initiative.

"On climate change, India now sees eye to eye and is willing to adhere to the Paris agreement and India might meet the commitment before the deadline. We discussed these three issues on different forums on our trip here," he said.