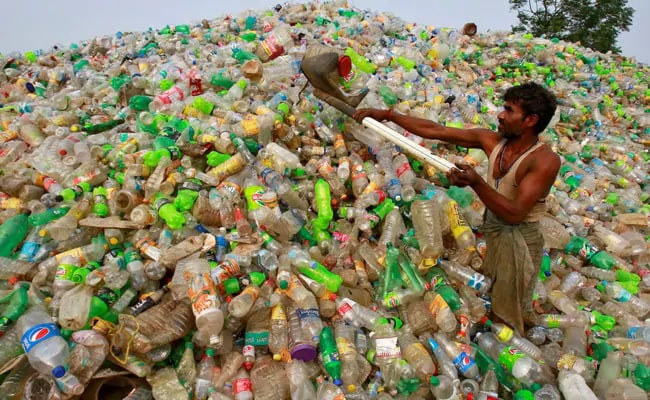 India generates more than 25,000 tonnes of plastic waste everyday, 40 per cent of which remains uncollected and littered in the environment, the Centre informed the Lok Sabha today.

In a written response to a question in the Lower House, Union Environment Minister Prakash Javadekar said the demand of plastic has increased significantly due its increased use in the fast moving consumer goods (FMCG) sector, which has indirectly resulted into the challenge of plastic waste management.

"With continued economic development, the demand for consumer goods is increasing. Among the various factors driving this growth, one of the most significant factor is increasing use of plastics by the Fast-Moving Consumer Goods (FMCG) sector."

"Due to its durability, strength, inert behavior and low cost, plastic emerged as one of the most reliable packaging material for the industries. As an outcome, the increase in demand for plastic has indirectly resulted into the challenge of plastic waste management," Mr Javadekar said.

Replying to another question on developing green alternatives to plastic, the minister said that due to its cheap cost, finding an alternative was a "challenging task".

"Due to various positive factors including cheap cost associated with plastic packaging, finding an ecologically sustainable and green alternative to plastic is a challenging task."

Referring to a study conducted by the Central Pollution Control Board (CPCB) in 60 major cities of India, the minister said that it has been estimated that around 4,059 tonnes of plastic waste is generated from these cities daily.

The minister informed that an expert group has been constituted by Central Institute of Plastics Engineering and Technology (CIPET) with respect to research and development for biodegradable technology on plastic.

The government aims to rid the country of single use plastic by 2022 as part of the Clean India (Swachh Bharat) part two campaign.

The government has notified Plastic Waste Management Rules, 2016, as per which the generators of waste have been mandated to take steps to minimize generation of plastic waste, not to litter plastic waste, ensure segregated storage of waste at source and handover segregated waste to local bodies or agencies authorized by the local bodies.

The rules prohibit the use of plastic bags with thickness less than 50 microns.