Both sides held "detailed and constructive discussions" in a "cordial enviroment" on various aspects of the proposed agreement, according to a joint press statement. The meeting was held in Attari. 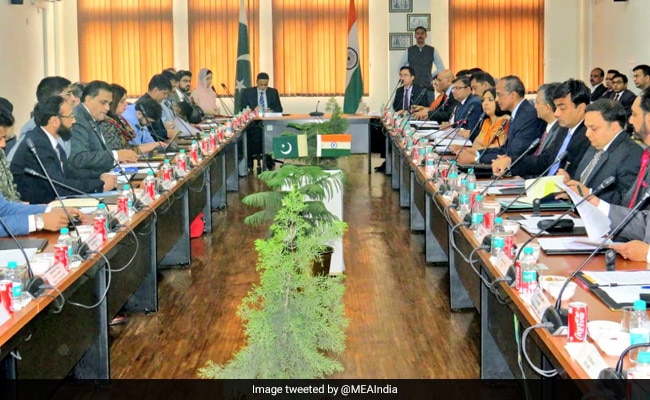 The meeting was held in Attari.

In the first meeting on the Kartarpur corridor issue between India and Pakistan, officials from both the countries on Thursday held discussions on setting up a corridor linking the Gurdwara Darbar Sahib in Pakistani town of Kartarpur with the Gurdaspur district in Punjab.

Both sides held "detailed and constructive discussions" in a "cordial environment" on various aspects of the proposed agreement, according to a joint press statement released after the meeting by the Ministry of External Affairs.

The meeting was held in Attari in Punjab's Amritsar.

Mr Das, addressing the reporters after meeting, said: "India, at the meet, insisted on the need for arranging the visit of at least 5,000 pilgrims per day - to begin with - in the phase-1 of the project. This should include not only Indian citizens but people of Indian-origin too."

Commitment to fulfill a dream!

Talks begin between India & Pakistan to discuss and finalize the modalities for the #KartarpurCorridor, at Attari, Amritsar, that'll facilitate Indian pilgrims to visit the holy shrine of Gurudwara Darbar Sahib Kartarpur. pic.twitter.com/XWSUtk0Ene

Respecting the sentiments of the people

Talks concluded on various aspects and provisions of the operationalisation of #KartarpurCorridor on the occasion of 550th Birth Anniversary of Guru Nanak Dev ji
Joint Press Statement at https://t.co/80pHULecY7pic.twitter.com/zUaaTYcajH

"Both sides held detailed and constructive discussions on various aspects and provisions of the proposed agreement and agreed to work towards expeditiously operationalizing the Kartapur Sahib Corridor," the joint statement read.

The latest meeting follows an agreement the countries struck last year to open the Kartarpur corridor, giving the pilgrims from Sikh community in India direct and visa-free access to the holy site in eastern Pakistan.

The meeting on Kartarpur, however, does not mean "resumption of dialogue with Pakistan", MEA Joint Secretary Deepak Mittal clarified. "Our position on the dialogue is very clear. Today what we had was a meeting on issue of the Kartarpur corridor, with an objective that pilgrims can have an easy access to Kartarpur Sahib," he was quoted as saying by news agency ANI.

The meeting comes weeks after tensions escalated between the two countries after the Pulwama attack on February 14. Forty soldiers were killed in an attack on a CRPF convoy in Pulwama district of Jammu and Kashmir.

The next meeting has been scheduled for April 2. Before that, experts from both the sides will hold a meeting on March 19 to finalise the technical experts.