India had said that it expects the "immediate and safe return" of the pilot who was captured by Pakistan during an air combat on Wednesday.

Pakistan Prime Minister Imran Khan has announced in Pakistan's parliament that the Indian Air Force pilot in its custody will be released tomorrow as a peace gesture. Earlier, the country had said it was prepared to release the pilot from its custody if doing so would ease tensions with India, its foreign ministry said Thursday. "We are ready to hand over the Indian pilot if it leads to de-escalation," the Pakistan foreign ministry spokesman told news agency AFP, attributing the statement to Foreign Minister Shah Mehmood Qureshi.

India has said that it expects the "immediate and safe return" of the pilot who was captured by Pakistan during an air combat on Wednesday. Sources have told NDTV that there will be "no deal" on the Indian Air Force pilot. The government would not ask for consular access. "We want him back. If Pakistan thinks that they have a card to negotiate with, they do not," sources said.

Earlier today, the United States, United Kingdom and France have moved a fresh proposal at the United Nations Security Council or UNSC to designate Jaish-e-Mohammed chief Masood Azhar a global terrorist. If the proposal in passed, Pakistan-based terror group Jaish-e-Mohammed or JeM chief Masood Azhar will get the tag of being a 'UN-designated global terrorist', which in turn would subject him to global travel ban, asset freeze and arms embargo.

The move comes amid heightened tensions between India and Pakistan after IAF fighter jets destroyed a major terror camp of the Jaish-e-Mohammed in Balakot, around 80 km from the Line of Control, in a pre-dawn strike on Tuesday.

On Wednesday, New Delhi summoned the Pakistan envoy and lodged a strong protest over "unprovoked act of aggression by Pakistan", saying its jets had targeted military installations in India a day after Indian fighter jets crossed the Line of Control and carried out a strike at a major terror camp.

India had been on high alert amid warnings of retaliation by Islamabad after IAF fighter jets destroyed a major terror camp of the Jaish-e-Mohammed in Balakot, around 80 km from the Line of Control, in a pre-dawn strike on Tuesday.

New Delhi said it was a "non-military and pre-emptive" strike based on credible inputs that Jaish was training suicide bombers for more attacks in the country. Over 40 soldiers were killed on February 14 when a Jaish-e-Mohammed suicide bomber attacked a security convoy.

Here are the LIVE UPDATES On India-Pak situation after IAF strike on Pak terror camps:

Mar 01, 2019 03:36 (IST)
I had good conversations and I am hopeful that we can take down the tension there, at least for the time being, so they can begin to have conversations that don't portend risk of escalation to either of the two countries. So we're working hard on that: US Secretary of State Mike Pompeo

Mar 01, 2019 03:35 (IST)
We were and continue to be engaged with issue between India and Pakistan. I spent good deal of time on phone yesterday talking to leaders in both countries, making sure good information was exchanged, encouraging them to not take action that will escalate and create increased risk: US Secretary of State Mike Pompeo
Feb 28, 2019 23:48 (IST)
Russian President Vladimir Putin told Prime Minister Narendra Modi in a phone call that he hopes for a quick settlement of a crisis between India and Pakistan, the Kremlin said in a statement.
Feb 28, 2019 19:42 (IST)
There is enough evidence to show that F-16s were used in this mission through their electronic signatures. Parts of AMRAAM, air-to-air missile,  which is carried only on the Pakistani F-16s was recovered east of Rajouri within the Indian territory: Air Vice Marshal RGK Kapoor 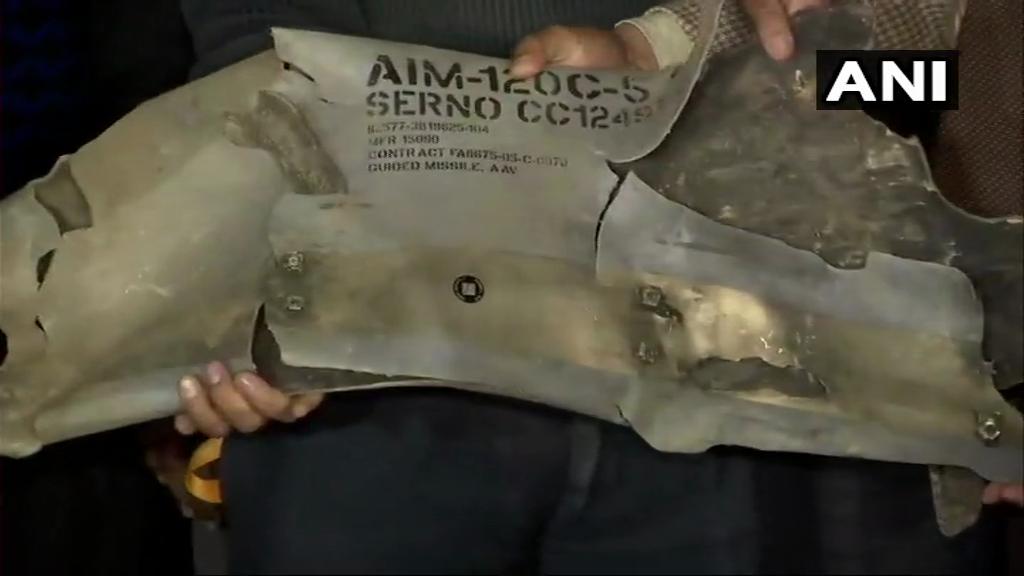 I pray and hope brave son of India Wing Commander Abhinandan will be reunited with his family tomorrow.
The country is proud of his courage.

Feb 28, 2019 17:48 (IST)
"Pakistan PM has exhibited real statesmanship today. It is time for our political leadership to step up and take measures to de escalate the current situation. People of Jammu and Kashmir are living under unimaginable duress. How much longer will we suffer for?": Mehbooba Mufti on Twitter.
Feb 28, 2019 17:45 (IST)

Very glad to know that #WingCommandarAbhinandan will be heading home. I'll wait for him to be back on Indian soil before I welcome him back but I'm greatly relieved that PM @ImranKhanPTI has announced the imminent release of our pilot.

Feb 28, 2019 17:29 (IST)
I am very happy, I had demanded his release earlier too. This is going to be a step towards goodwill and I hope this will be lasting: Punjab Chief Minister Amarinder Singh quoted as saying by the news agency ANI.
Feb 28, 2019 17:25 (IST)
US Secretary of State Mike Pompeo has talked to National Security Advisor Ajit Doval amid tense ties between India and Pakistan in the aftermath of the Pulwama terror attack and New Delhi's air strike against Jaish-e-Mohammed terror training camp in Balakot.
Feb 28, 2019 17:08 (IST)

Along with his family members and all our countrymen, we are anxiously waiting for the safe return of our pilot #Abhinandhan

BREAKING: No Deal On Pilot Captured By Pakistan, We Want Him Back: Sources
No deal on Air Force pilot captured by Pakistan, we expect that he is returned immediately: sources
Feb 28, 2019 14:13 (IST)
Pakistan violates ceasefire second time in a day
Pakistan resorted to unprovoked firing and heavy shelling of mortars along the Line of Control for the second time on Thursday.
The ceasefire violation was reported in Krishna Ghati sector.
Feb 28, 2019 14:08 (IST)
Army and Air Force will hold a joint press conference in New Delhi at 5 pm today.
Feb 28, 2019 13:28 (IST)
'Reasonably decent news from India and Pak': Donald Trump
US President Donald Trump has said that he hoped the tension between India and Pakistan will bee coming to an end. "We have some reasonably decent news from India and Pakistan," he said
at a news conference in Vietnam after a second summit with North Korean leader Kim Jong Un.
"Hopefully that'll be coming to an end," the US President said in response to questions.

"We have some reasonably decent news from India and Pakistan," says US President Donald Trump pic.twitter.com/u9Wz3PvpWi

Karachi Bakery In Bengaluru Gets Call Threatening To Blow It Up Over Name
The Karachi Bakery manager in Bengaluru outlet has claimed that he received a call to 'blast the store' if the word 'Karachi' not removed from the name board." The alleged threat comes amid the heighetened tension between India and Pakistan and the capture of an Indian Air Force pilot yesterday by Pakistan after an air combat.
The caller identified himself as Vicky Shetty, an "underworld don", the police said.
A case has been registered based on the complaint filed by the manager of the bakery.
Feb 28, 2019 11:40 (IST)

Defence Minister @nsitharaman meeting three service chiefs for a review of the situation within the next hour: Sources Author Fatima Bhutto, the grand daughter of former Pakistan Prime Minister Zulfiqar Ali Bhutto, has asked the Imran Khan government to release an Indian Air Force pilot captured after an air combat.
"I and many other young Pakistanis have called upon our country to release the captured Indian pilot as a gesture of our commitment to peace, humanity and dignity," Ms Bhutto, 36, wrote in an op-ed in the New York Times.
"We have spent a lifetime at war. I do not want to see Pakistani soldiers die. I do not want to see Indian soldiers die. We cannot be a subcontinent of orphans," said Ms Bhutto, a writer who is also niece of Pakistan's former Prime Minister Benazir Bhutto.
"My generation of Pakistanis have fought for the right to speak, and we are not afraid to lend our voices to that most righteous cause: peace," said daughter of Murtaza Bhutto, son of Zulfiqar Ali Bhutto.
"But our long history with military dictatorships and experience of terrorism and uncertainty means that my generation of Pakistanis have no tolerance, no appetite, for jingoism or war," she said.
In the afternoon on Wednesday, #saynotowar hashtag began to trend in Pakistan, before hitting the worldwide number 1 spot on Twitter.
Feb 28, 2019 08:36 (IST)
US, UK And France Move UNSC To Ban Masood Azhar

Indian Commercial Pilots Association: ICPA being a patriotic and responsible union would like to extend complete support and co-operation in all operations as the situation demands. We will support the government and the PMO in this fight against terrorism. pic.twitter.com/91SrDXuyi8

Indian Air Force Pilot, Geneva Convention: With Indian Pilot In Pakistan Custody, Calls To Follow Geneva Convention
As Pakistan claimed it had an Indian pilot in custody following an aerial encounter with the Indian Air Force over the Line of Control in Jammu and Kashmir today, there were calls to treat him humanely and in accordance to the Geneva Conventions."
Feb 28, 2019 07:55 (IST)
India Demands "Immediate, Safe Return" Of Air Force Pilot Captured By Pakistan
The government on Wednesday said it expects the "immediate and safe return" of an Indian Air Force pilot captured by Pakistan after an air combat that marked the worst escalation between the neighbours in decades.
New Delhi summoned the Pakistan envoy and lodged a strong protest over what it called an "unprovoked act of aggression by Pakistan", saying its jets had targeted military installations in India a day after Indian fighter jets crossed the Line of Control and carried out a strike at a major terror camp.
Feb 28, 2019 07:54 (IST)
For yesterday's highlights about the India-Pak situation, please click here.

What You Describe As Aid, We Call Friendship: S Jaishankar On Covid Crisis