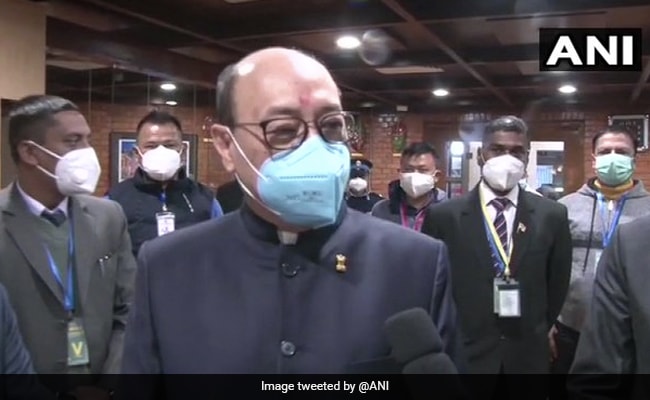 The COVID-19 pandemic has been a major disruption in the international system and India and Nepal have not been an exception to its adverse impact, Foreign Secretary Harsh Vardhan Shringla said on Wednesday, underlining the need for greater cooperation at the bilateral, regional and global level to combat the health crisis.

Mr Shringla was speaking after handing over 2,000 vials of anti-virus drug Remdesivir to Nepal's Foreign Minister Pradeep Kumar Gyawali as part of India's continuing assistance to the Himalayan nation to help it contain the COVID-19 pandemic.

Mr Shringla is on a maiden maiden visit to Nepal at the invitation of Foreign Secretary Bharat Raj Paudyal, amid a strain in bilateral ties following a bitter border row between the two countries.

"COVID-19 has been a very major disruption in the international system. It has not seen a crisis like this since the second World War. Both our countries have not been an exception to the adverse impact of the COVID-19," he said.

"We have lost lives. We have also lost livelihoods," Mr Shringla said, emphasising that COVID has brought to "our attention is a need for a greater cooperation at the bilateral level, regional and international level."

Mr Shringla said that Remdesivir is very therapeutic in the treatment of those suffering from the COVID-19 virus.

The intravenous antiviral drug, Remdesivir, is used to treat COVID-19. US President Donald Trump, who tested positive for the virus in October, was also administered Remdesivir.

"India is today the largest producer of vaccine in the world. We have tied up with many of the major vaccine manufacturers whether it is Astrazeneca, whether it is companies in the US, whether it is Sputnik5 from Russia," the foreign secretary said.

"Prime minister (Narendra) Modi has made it clear that we will ensure that the vaccine is not just for the people of India but for all humanity. We will make this vaccine accessible and affordable and it goes without saying that the first priority will be for our closest neighbours, our friends, like Nepal," he said.

Mr Shringla said that the two countries will put its health ministries and its regulators in touch with each other to ensure that when this vaccine enters the market, when it is available, Nepal will also have the fullest benefit of this vaccine.

Recalling Prime Minister Modi's initiative to bring the leaders of the SAARC together and constituting a SAARC emergency response fund to combat the pandemic, Mr Shringla said, "we are very grateful to Nepal's generous contribution of 1 million USD to the fund."

He said the fund and that meeting also ensured very extensive networking and cooperation on how to deal with the crisis. "We have also seen a number of initiatives by which we assisted each other in the form of health equipment, test kits."

He said at the international level, PM Modi took the initiative to convene for the, first time, a G20 extraordinary Summit to go into an issue that G20 has never done before- how to deal with an humanitarian issue.

"The Prime Minister (Modi) when he addressed the G20 at that time stricts the need for a human-centric globalisation, in other words organisations like the G20 need to look at the needs of humanity," he said.

Speaking about the ancient ties between India and Nepal, Mr Shringla said that the bilateral relations are age-old and historic.

"We have something which very few countries have. We have civilisation ties that come not from centuries but millennium," he said.

He said that even during the pandemic, the strictly imposed lockdown, "we ensured that trade, essential supplies and commodities continue to flow between our two countries and today we are looking into the possibility of taking our relationship further, faster and to greater heights," he said.

Excavation At Qutub Minar Over Temple Claims? What Centre Said